Disney VoluntEARs sort 40,000 pounds of produce for food bank on day of service With the holidays upon us, there is a lot of extra work needed by local charities. The Walt Disney Company recently gave a $1 million contribution to Feeding America, part of which enabled a gift of 40,000 pounds of produce to Central Florida’s Second Harvest Food Bank. But the non-profit needed help sorting it all. That’s where Walt Disney World’s amazing cast members stepped in.

As part of Family VoluntEAR Day, more than 150 cast members and their loved ones kicked off the holiday season of giving by sorting and packaging those 40,000 pounds of produce.

“Without a doubt, produce is the most commonly-requested item we, and most other food banks, receive from our community neighbors,” said Dave Krepcho, president and CEO of Second Harvest Food Bank. “While we are committed to ending hunger in Central Florida, we can’t do it alone. The support of our many community volunteers—including Disney VoluntEARs—helps make our mission possible.” 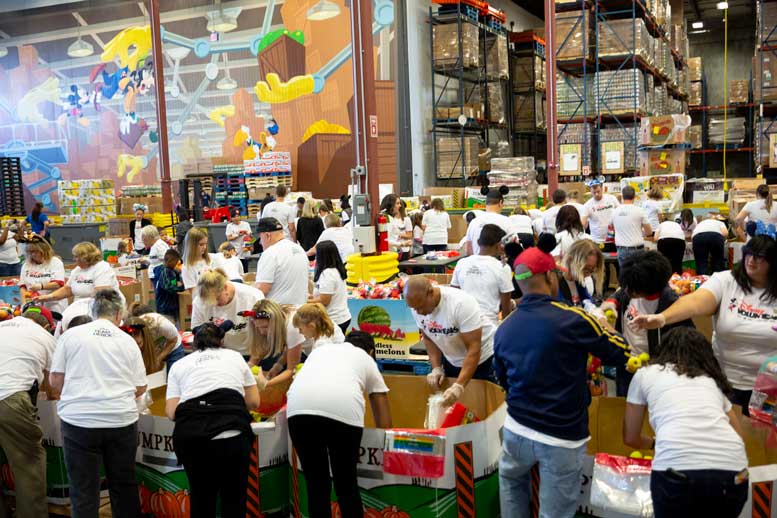 Disney has supported Second Harvest Food Bank for more than 25 years, and the day of service is part of an ongoing commitment to the Second Harvest mission of fighting hunger by feeding hope. Earlier this year, Disney granted Second Harvest $100,000 for their Teen Market and Nutrition Program, offering nutritious and complimentary foods to secondary school students who need it most. In addition, as part of the Disney Harvest program, deliveries of prepared and unserved food collected from across Walt Disney World Resort is delivered to Second Harvest-supported agencies, servicing up to 1,000 children and families each week.

“Today’s event is in celebration of 35 years of Disney VoluntEARing, and it brought together multiple generations of families to sort fresh, healthy food for the community in support of the work of Second Harvest Food Bank of Central Florida,” said Rena Langley, senior vice president of Walt Disney World Resort Public Affairs.

This is the 35th year of the Disney VoluntEARs program.