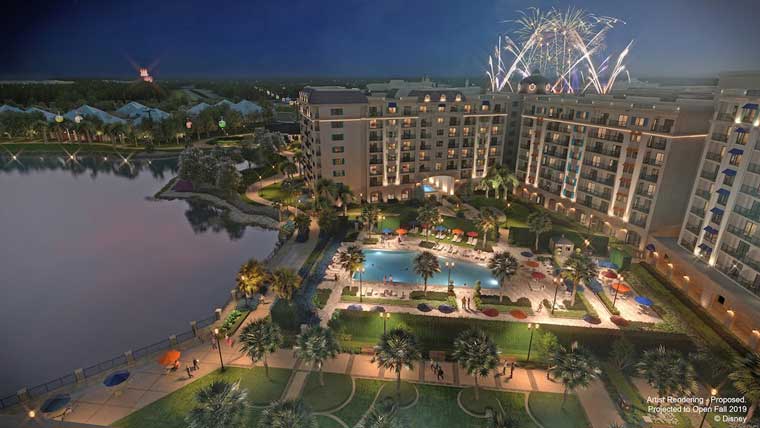 Walt Disney World is steadily working on its 15th Disney Vacation Club (DVC) Resort – Disney’s Riviera Resort. New concept art was just released showing the courtyard portion of the resort, with the pool and other guest facilities. The DVC offers a time-share like experience for guests who want to lock in lower prices for future Disney vacations for years to come and Walt Disney World is constantly expanding the amount of room inventory.

The resort is positioned to provide guests a great view of fireworks spectaculars from nearby theme parks like EPCOT and Disney’s Hollywood Studios. There will be easy access to the Disney Skyliner gondola network via a station located right at the resort.

We also learned the inspiration behind the hotel’s design. According to Disney, the resort is inspired by the European grandeur Walt Disney experienced in his travels along Europe’s Mediterranean coastline in his 1935 trip through Europe that is believed to have inspired many of his future films and even the theme parks.

Located next to Disney’s Caribbean Resort, Disney’s Riviera Resort is scheduled for a Fall 2019 opening, however, it is not yet for sale as part of the Disney Vacation Club.