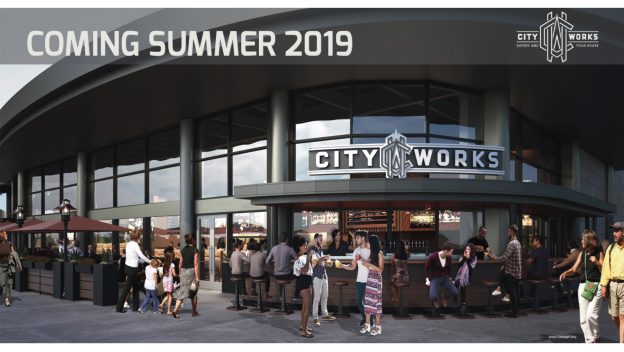 Disney Springs, Walt Disney World’s popular shopping and dining district, will soon have its first brew pub. The City Works Eatery & Pour House has been announced for a Summer 2019 opening. The restaurant will clock in at a huge 8,632 square feet and will feature retail space, expansive seating, and a 1,767 square foot patio.

Existing City Works restaurants in other locations contain both a restaurant and a bar with more than 90 beers on tap, including “rare, limited supply, special tappings from local breweries and others around the world.” As for the menu, expect “bar bites, sharables, burgers and more.”

Expect giant HDTV walls with state of the art audio-visual among the thoughtful, modern sports bar design. The outdoor patio is designed to offer guests an oasis in the heart of the action. The general feel of City Works fits in with the new atmosphere of Disney Springs as a destination mall where you go to eat, drink, and hang out with great entertainment options and maybe do some shopping along the way.

The official announcement from Disney did not mention exactly where City Works would be located, but it seems likely to be a part of the NBA Experience building on the Westside of Disney Springs. It’s the only construction that is far enough along to be finished by next Summer. Although Disney Springs does have a history of announcing opening dates and then failing to meet them by 6 to 12 months.

There are seven other City Works Eatery & Pour House locations in operation, including in Fort Worth, Texas; Minneapolis, Minnesota; Pittsburgh, Pennsylvania; Doral, Florida; and more. At least two other locations are currently under construction.