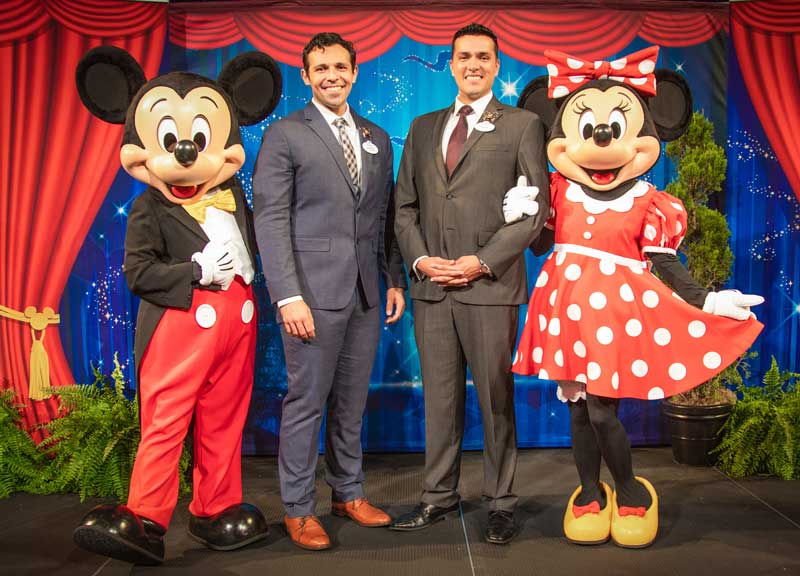 It’s a tradition dating back to 1965, the Disneyland Ambassador program features an outstanding cast member to represent the resort as goodwill emissaries at events in the community and when interacting with media. This week Disneyland announced a pair of Ambassadors selected from among its 30,000 cast members that will serve from 2019-2020.

Disneyland Resort President Josh D’Amaro announced that cast members Justin Rapp and Rafa Barron will represent Disneyland during a very exciting time for the park. During their two-year term, the resort will see the opening of Star Wars: Galaxy’s Edge, the Disneyland’s largest expansion in its history.

Justin and Rafa were selected from more than 100 applicants and will take the magic of the Resort into the community by acting as emissaries of goodwill. As part of their full-time duties, they will represent the Resort at a variety of events, such as monthly CHOC Children’s visits with Disney characters, special promotions, working side-by-side with local residents at community and nonprofit events such as KaBOOM! playground builds, and celebrating our cast at many recognition ceremonies. In addition, the pair will serve as spokespersons for the Resort, as well as host dignitaries and other VIPs. While the tradition started at Disneyland, today there are Ambassadors at every Disney Park around the world.

Justin Rapp joined the Disneyland Resort in 2012, cruising along the Nile River as a Jungle Cruise Skipper. He then felt a pull to Entertainment, where he has performed in a number of shows. Justin also facilitates a training class called Step into the Magic for new cast members. He is a native of Phoenix, Arizona, and currently resides in Anaheim

Rafa Barron hired into Tomorrowland Attractions two and a half years ago. He currently is a working lead at Buzz Lightyear Astro Blasters, Finding Nemo Submarine Voyage, Astro Orbiter and Tomorrowland Theater, and is a trainer in the area. When he’s not in the land of tomorrow, Rafa also facilitates orientation classes for new cast members in both English and Spanish. Rafa is a native of Mexico City, Mexico, and currently lives in Irvine.

Congratulations to both Ambassadors. Hang on to your hats and glasses, it’s going to be a wild couple of years.