Did Walt Disney really say that? This book has the answer There are a few books that are must-haves for any serious Disney fan. Sadly, many of them, like the excellent “Disneyland The Nickel Tour”, are long out of print. That’s why you’ll want to add “Walt’s Words: Quotations of Walt Disney with Sources” by Disney historian Jim Korkis to your collection today. 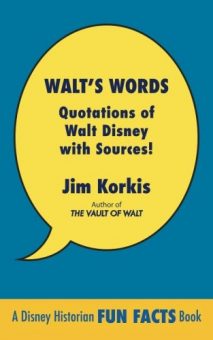 The book is the result or Korkis’ obsessive research through original source documents, like interviews, articles, speeches, TV appearances, and more to discover the exact words of Walt Disney’s wisdom. Each of the over 800 quotes are sourced and prefaced with valuable context as to the thoughts and attitudes that led Walt Disney to say that exact phrase.

You may be surprised by exactly what Walt said and what he did not. By the end of this book you’ll know much more about Walt Disney said about America, animation and films, art and music, books, business, Disneyland, education, fear and failure, Mickey Mouse, money and work, religion, storytelling, television, and women. It’s all there, uncensored, and unedited.

Here, for instance, is Walt Disney on film talking about Snow White and the Seven Dwarfs, just one of the sources used for the book:

“My big beef with television is the stupid commercials. They’re in bad taste. And there are too many of ’em. Why, I’ve watched shows that have been interrupted six times in 30 minutes to plug a product. This is bad showmanship. It’s hurting television.”/em> — December 18, 1952 interview for the United Press with reporter Virginia MacPherson.

I think Walt would have been a cord-cutter.

“In Disneyland, clocks and watches will lose all meaning, for there is no present. There are only yesterday, tomorrow and the timeless land of fantasy. Disneyland is based on the dreams and hard facts that have created America. When they visit here, the older generation can recapture the fun and nostalgia of yesterday, and the younger generation can savor the challenge of the future.” — Look magazine, November 2, 1954.

Buy “Walt’s Words” today and you’ll always be able to answer the question, “did Walt really say that?”