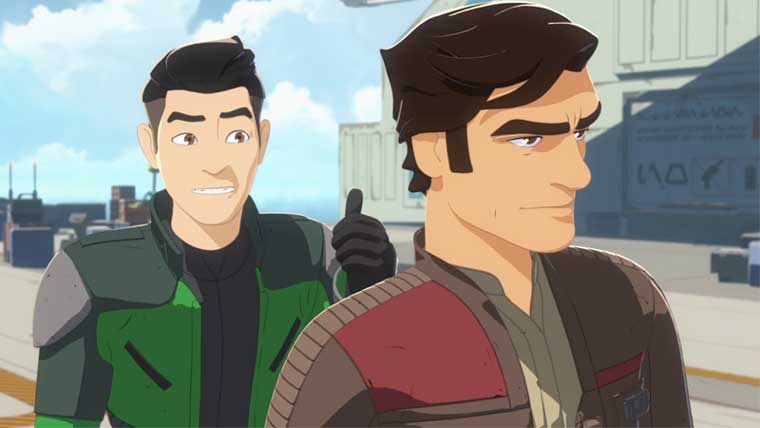 Sign up for those X-Wing lessons and get ready for the next animated series from Lucasfilm and Disney. The first trailer for Star Wars Resistance is now out. The show will pick up with the resistance as it builds momentum in the years ahead of the events of Star Wars: The Force Awakens.

Just from the fact that this show is first showing on the Disney Channel and not Disney XD, it’s safe to assume Disney and Lucasfilm are targeting it for a younger audience. That’s a smart move. You want each generation to have their own Star Wars experience. It will introduce them to the Star Wars Galaxy, give them something they can claim as their own, and hopefully interest them in seeing future movies and maybe going back to appreciate earlier series when they get a little older.

Read the synopsis for the pilot episode:

Poe and BB-8 assign newly-appointed spy Kaz to the Colossus, a massive aircraft re-fueling platform on an outer rim water planet, home to colorful new aliens, droids and creatures. While undercover, Kaz works as a mechanic and lives with Poe’s old friend Yeager, a veteran pilot who operates a starship repair shop run by his crew: Tam, Neeku and their old battered astromech droid, Bucket. Kaz soon finds himself in over his head with his new friend BB-8 as he’ll have to compete in dangerous sky races, keep his mission a secret from his newfound family, and avoid the danger of the First Order.

While you’ll still find familiar characters of the Resistance (BB-8, Poe Dameron, General Leia Organa) on the show from time to time, the series focuses on a young pilot named Kazuda “Kaz” Xiono. Kaz is recruited by the rebel group to go on secretive spying missions learning what he can about the villainous First Order, which is also growing in strength.

Watch the full trailer below:

Okay. It took me watching a couple times to get used to the animation style. It’s definitely more anime inspired than previous Star Wars animated series. However, the more I watched the trailer, the more cool things I saw, the more my anticipation grew for the show.