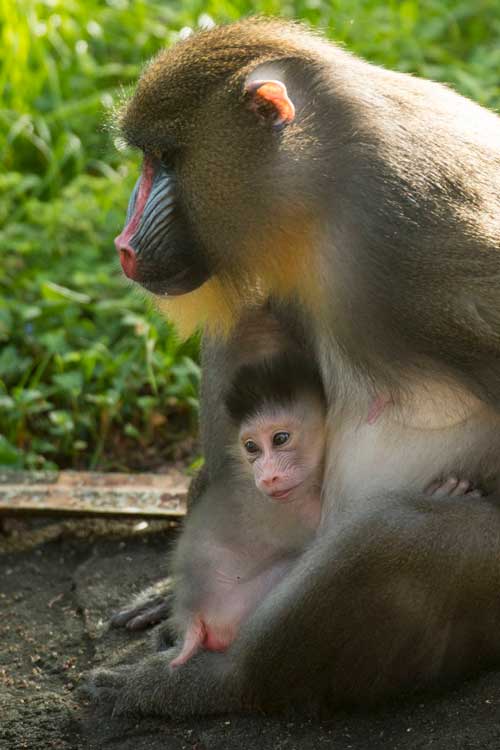 Monkey Rock, it’s about mid-point on the Kilimanjaro Safaris attraction and signals the transition from the African Savannah to Elephant Territory. Often times the trucks drive by without a sighting of the Mandrill family that occupies the enclosure and when you do see them, it’s a brief view before attention turns to the much larger pachyderm nearby.

Next time by there will be a reason to pay closer attention as a new member of the mandrill family was born on August 8 to mom Scarlett and dad Winston.

Mandrills are the largest species of Monkey. Identifiable by bright markings on and around their noses and cheeks, the species is found in African rainforests near the equator. Unfortunately vanishing habitat related to deforestation and poaching have made their survival as a species questionable. 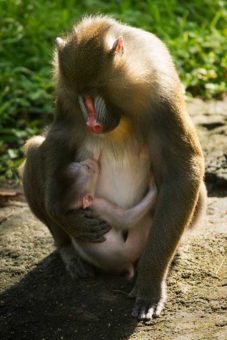 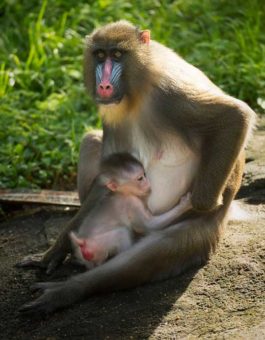 Disney’s participation in the Association of Zoos and Aquariums (AZA) breeding programs for a Species Survival Plan (SSP) is an important part of conserving the Mandrill monkey for future generations. The highly trained team of Disney animal care experts support animal births at Disney’s Animal Kingdom and share their knowledge with other animal care teams at zoos and AZA facilities across the world.

Cast member Rebecca Phillips is an Animal Operations manager at Disney’s Animal Kingdom and is the SSP coordinator for Mandrills with the AZA.

“There are many reasons why I’m excited to be an SSP coordinator for mandrills,” said Phillips. “I love helping zoos, including our own, and I love the success stories. As a two-time mom and also a surrogate mother, Scarlett is an example of how we’re helping a vulnerable species thrive, and it’s thrilling to watch her family grow.”

Disney’s work to support mandrills doesn’t stop there. Since 1995, the Disney Conservation Fund has provided more than $6.5 million to support conservation of mandrills and other primates in 29 countries.

As far as the new baby mandrill, the gender and exact birth weight is unknown because Disney’s animal care team is giving Scarlett and her baby plenty of time to bond.

If you see Scarlett, Winston and their baby on your next Kilimanjaro Safaris adventure, be sure to let us know.