There’s now more Halloween than ever at the Disneyland Resort 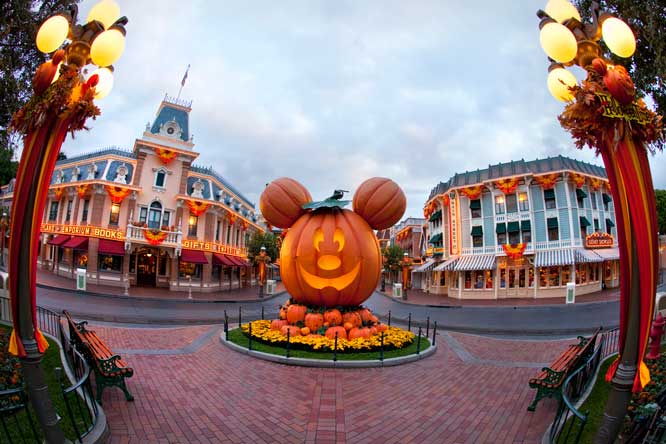 The fall season at the Disneyland Resort is a crowd favorite. The parks look fantastic in their autumn colors and Halloween themed decor and this year guests will enjoy more days that ever to celebrate the harvest holidays at both Disneyland and Disney California Adventure. The limited-time event called Halloween Time will bring enchanting fun and frightfully good times themed to the season from Sept. 7 through October 31, 2018.

Along with the decor, both parks will feature attractions with seasonal overlays, Halloween-themed décor and food and beverage offerings, plus encounters with dastardly Disney villains, happy haunts will materialize around every corner.

New this year is the popular character Vampirina, from the Disney Channel and Disney Junior hit series for kids and families, “Vampirina.” Also known as “Vee,” Vampirina arrives at Disneyland Resort for the first time ever, just in time for the Halloween season. Guests will have the opportunity to meet Vampirina at Disney California Adventure Park starting September 7. She will also make a special appearance during the “Frightfully Fun Parade” at Mickey’s Halloween Party.

Mickey’s Halloween Party returns with select nights of after-hours fun. This separate-ticket event features some exclusive entertainment, Disney characters in their Halloween attire, trick or treating at locations throughout Disneyland Park and a chance for the entire family to visit the parks after hours in costumes. 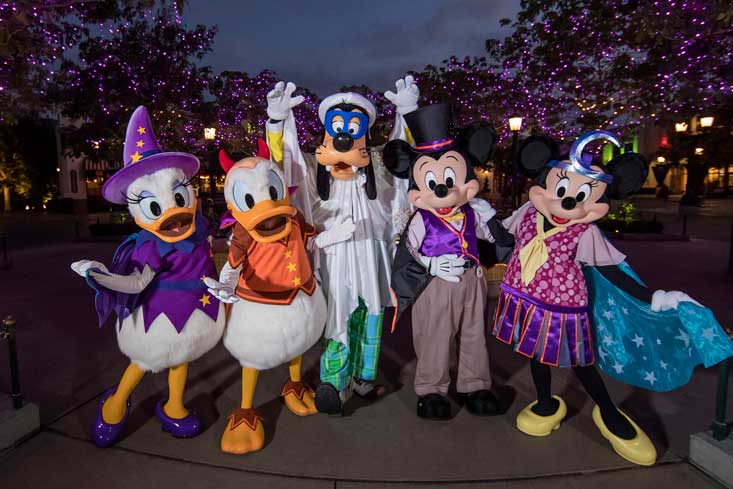 A spell will be cast as you enter Disney California Adventure park to celebrate the season. Oogie Boogie takes over with his twisted tale of a forever Halloween, inspired by “Tim Burton’s The Nightmare Before Christmas.” Oogie Boogie’s oversized silhouette will beckon guests through the main entrance of the park, and hover over a swarm of bats that circle around Carthay Circle Restaurant and Lounge.

Halloween décor will extend along Buena Vista Street to Carthay Circle, where you will encounter an impressive 10-foot-tall statue of the Headless Horseman holding his jack-o-lantern head to the sky.

The citizens of Cars Land celebrate Halloween by turning Radiator Springs into Radiator Screams. The entire land is transformed with a special Haul-O-Ween makeover as the townsfolk of Radiator Springs don Halloween costumes and decorate their respective homes for the season.

Guardians of the Galaxy – Mission: BREAKOUT! transforms nightly into Guardians of the Galaxy – Monsters After Dark, bringing Halloween adventure to this popular attraction. As the sun sets, the attraction’s exterior goes dark and then suddenly powers back up with lighting effects, a signal that something has gone awry. The Guardians have successfully escaped The Collector’s Fortress, but have accidentally left Groot behind. Guests help Rocket distract the creatures that have been released so he can rescue Groot in this exciting seasonal overlay.

The Halloween magic continues at Disneyland park, where you will enjoy beautiful décor on Main Street, U.S.A., including a giant Mickey Mouse jack-o’-lantern and a Pumpkin Festival.

Two popular attractions transform into their annual Halloween themes, delivering Halloween thrills for guests who dare to take a ride. Haunted Mansion becomes Haunted Mansion Holiday, inspired by the Walt Disney Pictures classic “Tim Burton’s The Nightmare Before Christmas.” The seasonal attraction celebrates the collision between Halloween and Christmas as Jack Skellington offers his unique take on the holidays.

Space Mountain in Tomorrowland becomes Space Mountain Ghost Galaxy, a reimagining of the popular attraction. Guests on board the speeding Space Mountain vehicles are thrust into a ghostly galaxy where they are surrounded by eerie screams, sound effects and music. Spine-chilling spirits pop out of the darkness, appearing to reach out and menace the space travelers.

Additionally, to commemorate the Mexican holiday of Day of the Dead, you will encounter the colorful Día de los Muertos tribute in Frontierland, an exhibit that features a musical trio of iconic skeleton figurines, brightly colored flowers and other decorative items.

Mickey’s Halloween Party is an after-hours, separate-ticket event, where attendees may dress in costume and have the opportunity to trick-or-treat throughout Disneyland Park for candy and healthy goodies. Mickey’s Halloween Party also includes special entertainment, classic attractions and the added bonus of unlimited Disney PhotoPass digital downloads of photos taken during the event, making it easier than ever to capture memories during the party.

Also exclusive to Mickey’s Halloween Party is the “Frightfully Fun Parade” led by The Headless Horseman of Sleepy Hollow (from the Disney animated classic, “The Adventures of Ichabod and Mr. Toad”). The Horseman rides down Main Street, U.S.A., on his ghostly black steed with a flickering jack-o’-lantern to usher in the parade, which features Vampirina, Jack Skellington and a procession of grim, grinning (and hitchhiking) ghosts from the iconic Haunted Mansion attraction.

When you’re at Mickey’s Halloween Party, you may also visit Villains Square for a chance to encounter and take photos with Disney villains. Additional Disney characters donned in Halloween attire can also be found throughout the park.

As an added value, guests with a Mickey’s Halloween Party ticket will have the opportunity to “mix in” with regular park guests for three hours prior to the party’s start time. These guests also may visit both Disneyland and Disney California Adventure parks with their tickets.

Mickey’s Halloween Party tickets may be purchased online and on mobile devices at Disneyland.com/party as well as at the Disneyland Resort main gate and by phone at 714-781-4400. Some nights may be sold out and guests should check availability for their preferred nights soon. Online and mobile purchases are not available the day of the event. Parking is not included in the ticket price, and parking fees will apply.

Mickey’s Halloween Party and the rest of Halloween Time at the Disneyland Resort looks like it gets better every year. What do you like the most about this time of year at Disneyland and Disney California Adventure?