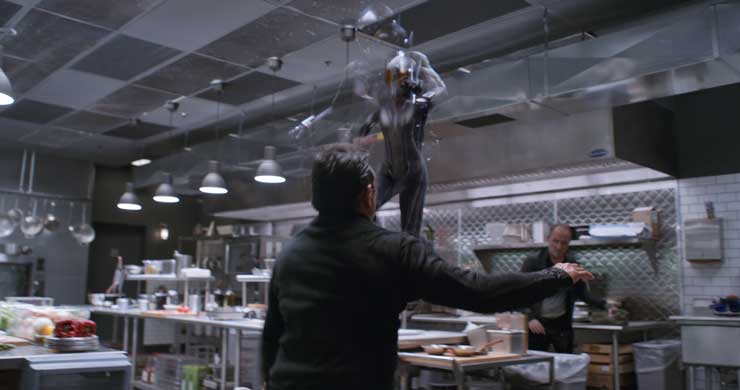 Modern film making technology can be an incredibly complicated process with a mix of digital effects and live-action in-camera magic, superhero films double down on that by requiring filmmakers to figure out how to represent powers (such as rapidly shrinking and growing) on the screen in visually interesting and yet easy to comprehend ways. For Marvel Studios’ “Ant-Man and the Wasp” the big kitchen fight scene is a example of how well director Peyton Reed was able to bring his vision to the screen.

Vanity Fair enlisted Reed to participate in their “Notes on a Scene” video series and break down how he and the film’s crew blended live-action and computer generated images to create a super hero fight scene that still makes sense in the physical world and look out of this world at the same time.

There were actually more real world effects and practical in-camera work involved than I thought there would be. I also liked to see how they captured Evangeline Lily’s face with a camera array and then superimposed it on her CGI costume and action sequences.

Watch Director Peyton Reed here, but be aware there are some spoilers of the minor type in his explanation of the scene.

Have you seen Marvel’s “Ant-Man and the Wasp” yet? What did you think of the CGI vs live-action effects?