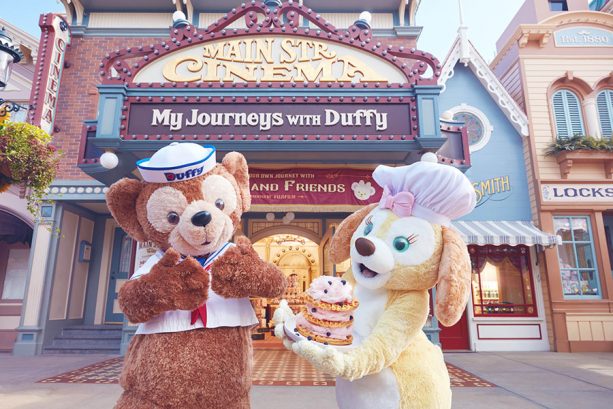 Duffy the Disney Bear started as a special toy available only at Walt Disney World’s “Once Upon A Toy Shop,” it later became very popular with Disney fans at Toyko Disney Resort where it grew into something of a cultural phenomenon. Originally, The Disney Bear, as he was known, was meant to be Mickey Mouse’s friend (note the mickey shaped paws and face), now one name change and a decade later, there are four plush friends to keep Duffy company.

The Disney company has been attempting to capitalize on the Duffy craze by introducing new characters. Starting in 2016 with Shellie May and Gelatoni, Stella Lou joined in 2017 and this year a yellow female dog name Cookie has joined the squad. Cookie just had her global debut at Hong Kong Disneyland (HKDL), the first of the Duffy characters to debut there. Cookie is inventive and resourceful, particularly when it comes to food. With her signature beautiful eyes and long floppy ears, Cookie charms her fans with her passion for delicious recipes to delight and amuse. This food lover, in a chef’s hat with a cute pink bow, is the very best of friends with Duffy, ShellieMay, Gelatoni and StellLou.

Starting from today, guests at HKDL will be the first to meet Cookie in person at “Main Street Cinema: My Journeys with Duffy – Presented by Fujifilm.” HKDL is also proud to offer exclusive merchandise items celebrating her arrival, including desserts and other snacks inspired by Cookie herself and her creative recipes.

“Our Duffy collections have always been one of the most popular in the park,” said Samuel Lau, managing director, Hong Kong Disneyland Resort. “Duffy first joined our resort in 2010 and we have continued to bring in new magical experiences to our Guests based on the amazing stories and Duffy and Friends. We are confident that Cookie will be bringing further excitement to our fans and expanding our Duffy fan base to more guests from around the world.” Do you collect Duffy the Disney Bear and his friends? How far have you traveled to pick up one of the plush characters?