Pixar Pier opened at Disney California Adventure over the weekend with four new ‘neighborhoods’ to explore – Incredibles Park, Toy Story Boardwalk, Pixar Promenade, and Inside Out Headquarters. But not all attractions were ready for guests. In 2019 the park will open Jessie’s Critter Carousel and the newly named Inside Out Emotional Whirlwind.

The new attraction for Inside Out Headquarters looks very familiar to guests who love the ‘A Bug’s Land’ attraction Flik’s Flyers. There’s wide speculation that it is the same ride re-themed and moved after ‘A Bug’s Land’ closes later this year. Judging by the concept art, the whimsical family-friendly themed attraction inspired by Pixar’s “Inside Out” will be full of emotions and quite colorful. Check out the new concept art above. 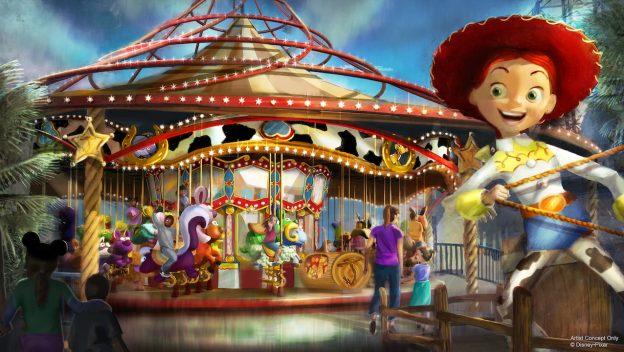 Jessie’s Critter Carousel is inspired by Jessie’s wilderness friends from the Woody’s Roundup TV show envisioned in Pixar’s “Toy Story 2” movie. This remakes the original King Triton’s Carousel keeping an important part of a seaside pier feel to the land.

It’s good that DCA is keeping a good mix of family-friendly attractions after “A Bug’s Land” closes, but this won’t replace all the lost attractions there. Do you think Disney needs to add more attractions suitable for all ages to the park?