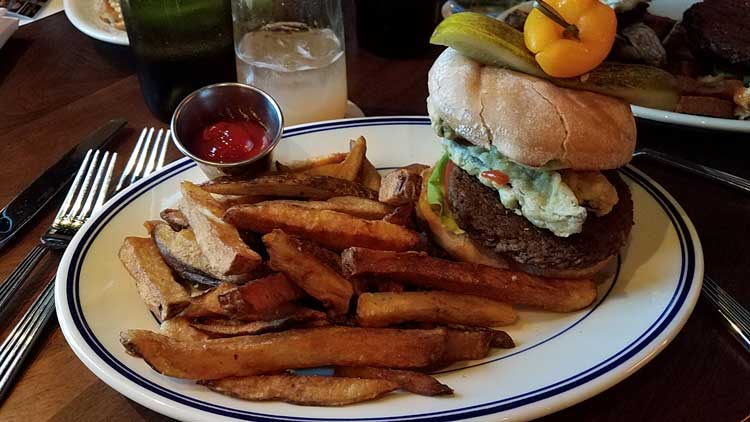 As you walk by in your flip flop, fanny pack, Mickey Mouse t-shirt take a moment to enjoy one of the more unique restaurants to ever open at Walt Disney World – The Edison. The Edison occupies roughly the same footprint as the fondly remembered Adventurers Club and with its steampunk ethic, it brings back some of the same spirit of adventure just mixed with turn of the century music and dance (and a nightclub atmosphere for late night) replacing the comedy hour. It’s a party for sure.

The menu for The Edison is a party of flavors too. The Disney Blog was invited to a media preview of the featured June burger along with a sampling of other popular menu items. In June The Edison has elevated an item from their normal menu and made it something entirely electric!

The Electric Garden Impossible Burger features not just a tasty entirely plant-based patty, but toppings to electrify your taste buds. We loved the tempura fried avocado and mushroom slices, a layer of sweet and spicy pickles gave the sandwich a wonderful crunch, and the harissa cocktail sauce added just the right amount of kick. Entirely vegan too. The burger is served with very tasty handcut fries (may be friend with animal product, so ask if you’re a strict vegan).

Let’s address the Impossible Burger patty. Don’t think of it as a substitute for a meat patty. Think of it as a replacement. A plant-based patty is much easier on the planet and will help leave a better world for future generations. It helps that it’s a tasty patty. Whether you think it tastes like meat or not depends on what you think meat tastes like. For the record, I think it tastes wonderful, very close to a burger. Unfortunately, the patty I had for this tasting was a bit dry, it’s plant-based, so ask for yours to be juicy on the inside and you should be ok.

For our tasting we were also served a very deliciously prepared side of Aspargus with lemon oil and sea salt (have already ordered some lemon oil… it was a revelation). Also brought to the table was The Edison’s famous rack of bacon and a bowl of fried Calamari.

For dessert we were provided samples of Apple Cobbler, Lollipop cheesecake, and Key Lime Tart. Your senses will be rewarded with any of the above.