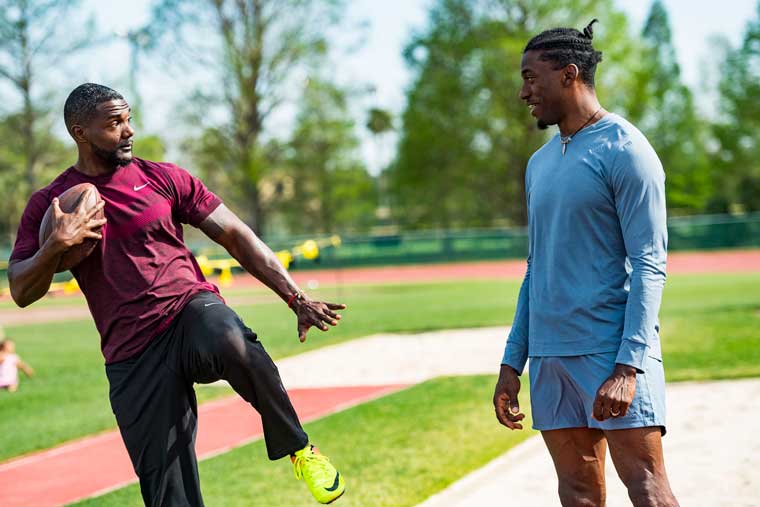 Olympic track star Justin Gatlin (left above) and NFL quarterback Robert Griffin III, who are both currently focused on resurrecting their professional careers, are at ESPN Wide World of Sports Complex this week doing some training. That’s fitting when you consider that both are trying to make magic at the place – Walt Disney World – where magic happens every day.

After being out of the sport from 2006 to 2010 following two suspensions, Gatlin has not only returned but catapulted to the top of the track and field world. At last year’s IAFF World Athletics Championships in London, he did what many people thought impossible – he beat 19-time Olympic and World Champion medalist Usain Bolt in the 100-meter dash, earning him the moniker as “the fastest man on earth.”

“It was a surreal moment. I certainly was on cloud nine for about four or five days,” Gatlin said. “I remember picking up my phone and saw where I had 458 text messages from friends, family members and people I know from all over the world. It took me the better part of three days to respond to everyone. I felt like I was in a dream.”

Likewise, Griffin or RG III as he is called, is just beginning his dream journey back to NFL prominence after being out of football last season. In fact, he recently signed with the Baltimore Ravens where, at 28 years old, he hopes to remind people why he was the 2011 Heisman Trophy winner and the second overall pick in the 2012 NFL Draft.

“Sitting out for a year made me realize that this (playing quarterback in the NFL) is what God has called me to do and this is what I want to do,’’ he said, “and I have never stopped working towards that goal.” 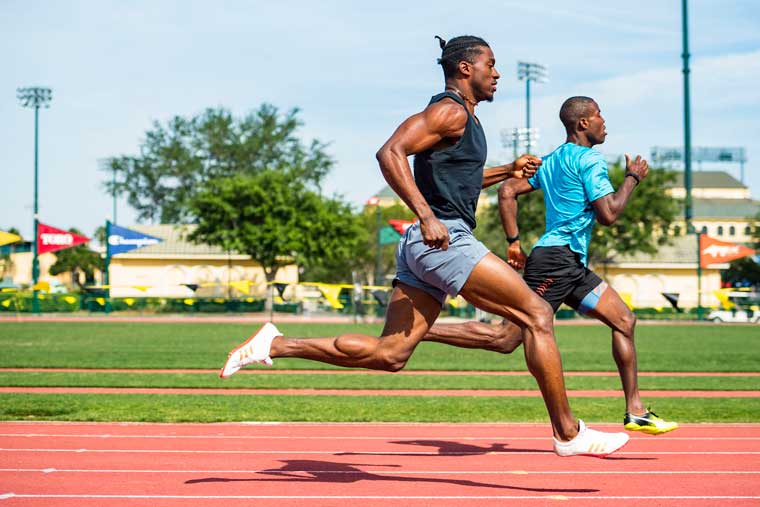 Both Griffin and Gatlin are working out at Disney under the tutelage of legendary track and field coach Brooks Johnson, 84, who was part of the U.S. Track and Field Olympic coaching staffs in 1976, 1984, 2004 and 2008, and was elected to the USA Track and Field Coaches Hall of Fame in 1997. Griffin has also been working with the Tom Shaw Performance Camp at the sports complex along with other marquee NFL players and collegiate stars.

“These two guys are world class athletes,” Johnson said of Griffin and Gatlin. “Justin absolutely has a chance to make the Olympic team for the Summer Games in Tokyo in 2020. Robert, coming out of high school, was one of the most sought after track athletes in the country. He has world class speed. You can’t come out here and train and work out with guys like Justin, LeShawn Merritt and some of the others we have out here and not be fast.”

Gatlin, 36, has worked on and off with Johnson since 2011 and says the coach is a master motivator who will use any means necessary to get the best out of his pupils. Griffin, who graduated from Baylor University in three years with a bachelor’s degree in political science, said the process of resuscitating his NFL career began in December when he moved to Orlando, met with Johnson and formulated a plan where Johnson would help him increase his speed.

“Obviously, I was familiar with the legend of coach Johnson,” he said. “I’ve been working with him for two months on the track and the speed part of my game and I’ve also been working with Tom Shaw and his team on the throwing and strength and conditioning part of my game. These two guys are the best in the business at what they do, so I definitely have the best of both worlds. I feel like I’m faster because of the work I’ve put in with coach Johnson and I also feel like I’m stronger based on coach Shaw’s strength program.”