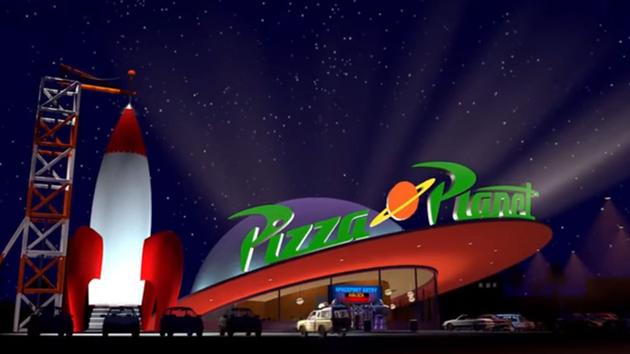 This week Disneyland made it official, everyone’s favorite aliens, the little green men from Pixar’s Toy Story franchise, will be invading Disneyland with a Pizza Planet restaurant inspired by the location that featured in the Toy Story movie. “Alien Pizza Planet” will include a menu of popular pizzas and other items. Look for a pizza inspire by the alien’s home planet of Pepperonia and a take on a cheeseburger pizza that’s bound to please.

The temporary theme will replace Redd Rockett’s Pizza Port during Pixar Fest, which runs from April 13-Sept 3rd. Redd Rockett’s was added to Disneyland as part of the new Tomorrowland that opened in 1998.

I think many fans were hoping for a complete remodel of the Redd Rocket’s location into the Pizza Planet restaurant from Toy Story. The image at the top is Pizza Planet from Toy Story movie, but if you squint you can see how it was inspired by Disneyland’s Tomorrowland with with TWA rocket and the Rocket to the Moon attraction which is the space Redd Rocket’s Pizza Port now occupies.

Would you like a permanent Pizza Planet theme instead of Redd Rocket’s Pizza Port?