We’re just a few days away from being able to download Star Wars: The Last Jedi via your favorite digital download service and there are now a few clips released online highlighting some of the bonus features you’ll be able to enjoy along with the film. The best clip so far is this deleted scene that was highlighted on The Star Wars Show.

In this full deleted scene, the fall into the fiery pit did not finish off Captain Phasma, but rather she rises again, with a few Storm Troopers in tow to face down Finn once again. (Note: Skip to minute 1:30 if the auto-play doesn’t work.)

As cool as it is to see Finn get the better of Phasma by revealing her betrayal of the First Order on Starkiller Base and getting her to help the rebels yet again, it’s an unimportant character development for Phasma who is destroyed by Finn only moments later. That’s the moment fans wanted and got in the final cut. Seeing Phasma plunge into the fiery pit was satisfying enough.

“I really like the little moment of Phasma being caught and getting called out by John, and that little game of chess that they have,” director Rian Johnson revealed to Entertainment Weekly about the scene. “But we needed a much more condensed version of that scene.” 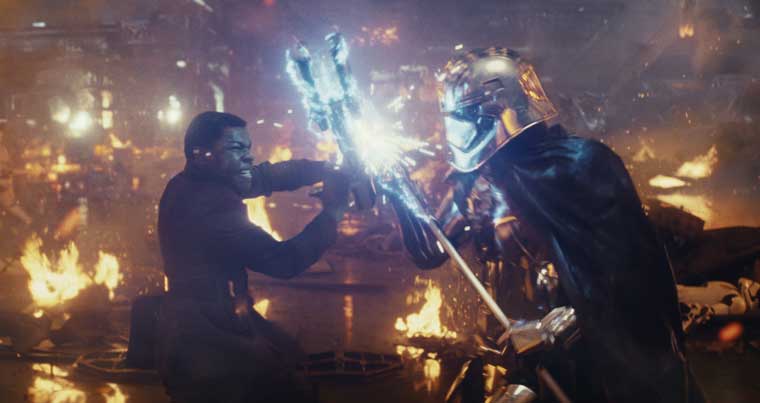 We agree that the battle aboard Snoke’s star destroyer is very fast paced and intense, having this scene in the middle would just slow everything down for too long and hurt the pacing. But it’s still a cool moment and we’re glad it will make it into the deleted scenes on the blu-ray and digital download.

Pre-order Star Wars: The Last Jedi on digital download today or pick it up in person on March 27.