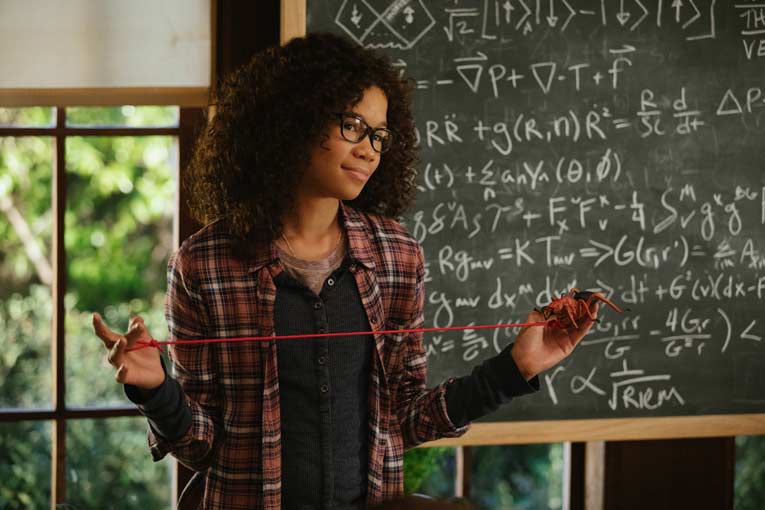 In Disney’s “A Wrinkle in Time” audiences are invited to go on an adventure with Meg Murry, her younger brother Charles Wallace, and Meg’s friend Calvin. Along the way they use the power of science, friendship, and love to solve the great mystery of her father’s disappearance. Based on a book that has been a clarion bell for generations of youth to find their way into science fiction and maybe a career in STEM, Disney has high hopes that its movie will stir similar actions in this and future generations.

The world has changed a lot since Madeleine L’Engle’s novel “A Wrinkle in Time” was first published in 1962. However, some things are timeless. Kids are still bullied, still develop anxieties about their appearance and social abilities that leave them off balance, and struggle to develop and identity that’s separate from their parents will still being part of the family unit.

The movie updates the story to today, but smartly sticks very closely to the more timeless issues of the novels. Screenwriter Jennifer Lee (“Frozen,” “Wreck-it Ralph”) said of the challenge, “As a child, the book defied anything I had read at that point in my life in terms of imagination,” says Lee. “And it was my first introduction to a character like Meg—someone who is dynamic and flawed and unique, who goes through an extraordinary adventure and comes out stronger as a person.”

Disney trusted the direction of Wrinkle to Ava DuVernay. Although she moved into her career as a Director later in life, she’s already had great success with “Selma” and “13th.” DeVernay remembered reading Lee’s script, “As a woman, the story of a female heroine at the center of a spectacular journey really resonated with me.”

“‘A Wrinkle in Time’ is this beautiful stew of mystery, fantasy, adventure, science, romance, social commentary, and spirituality,” continued DuVernay. “It’s not often that we see girls at the center of a story–and certainly not girls of color–amid all these different worlds and planets. It really is something out of my wildest imagination.”

The movie itself is as close to a tonal painting as a modern American film can get. Not artsy enough to be an art film, but definitely unusual as far as mainstream movies go. You don’t watch the movie as much as let it wash over you.

As Director Ava DuVerney says, it is a film for the young and the young at heart. Tweens and teens will identify the most with the issues covered in Wrinkle and with its main characters. Anyone who was once a tween or teen will no doubt see a bit of themselves in one or more of the characters.

It’s been years, decades really, since I last read the book, so I went into the movie with only a vague plot synopsis idea of the book. You don’t have to have read the book to enjoy the movie. Even though great distances are crossed, the story proceeds in a very linear fashion. It’s not exactly predictable, but the characters don’t appear to have much agency other than to just give up and let the darkness take them.

The movie tessers (L’Engle’s word for folding space and time to travel great distances in the universe) from one amazing world to another, encounters helpful celestial beings, but ultimately comes down to one daughter’s fight to save her family from the forces of darkness and evil. In that way it’s very much a modern Disney fairy tale.

If a movie’s message could make a difference in the world, then this movie would do it. But the novel had the same message and, alas, we’re still living in a world where darkness exists and light has to fight to be seen or heard.

Tesser to your local theater of March 9th with your kids and see Disney’s “A Wrinkle in Time.”