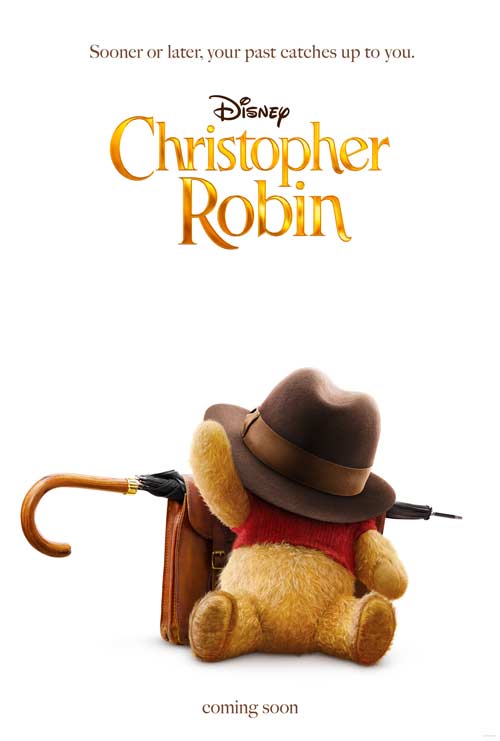 From Disney and the director of Finding Neverland (Marc Forster) comes Christopher Robin. A live-action revisiting of the world imagined by A.A. Milne. As Disney marketing likes to do, they revealed a new poster one day ahead of a new trailer. You may recognize a very famous stuffed-with-fluff bear on the poster.

And this morning the released the trailer:

The Hundred Acre Wood is opening up to our world. Watch the brand-new teaser trailer for Disney’s #ChristopherRobin. ? pic.twitter.com/4hz2s1MZ9x

The movie is set decades after Christopher Robin’s youthful adventures with Winnie the Pooh. As he grew older, his memory of the magical Hundred Acre Wood faded and now the Pooh and the gang love lovable stuffed animals are on a mission to help Robin rediscover the magic, wonder, and imagination of his youth.

Christopher Robin stars Ewan Macgregor (Christopher Robin), Hayley Atwell (Christopher’s Wife Evelyn) and Bronte Carmichael as their daughter Madeline. For the characters the movie features the voices of Jim Cummings as Winnie the Pooh, Chris O’Dowd as Tigger, Brad Garrett as Eeyore, Toby Jones as Own, Nick Mohammed as Piglet, Sophie Okonedo as Kanga, and Peter Capaldi as Rabbit. We have to say, that sounds like a pretty amazing voice cast.

It’s easy to forget that Christopher Robin was a real person who had his own falling out with the fame his father’s stories brought him. Obviously, this story is fictional.

The movie is currently scheduled for release on August 3rd, 2018. However the poster just says coming soon. So who knows.