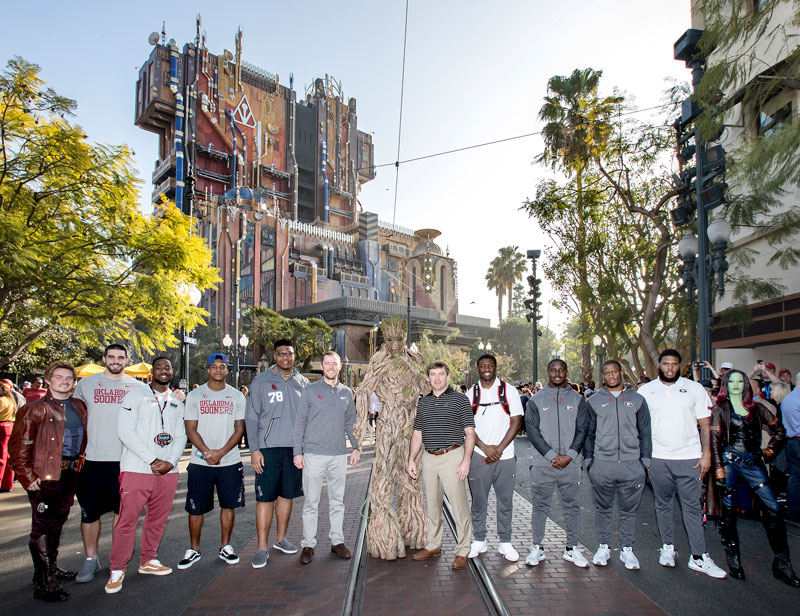 It’s a yearly Rose Bowl tradition. Players from both teams make a visit to Disneyland before the big game itself on January 1. This year the teams were the No. 2 Oklahoma Sooners and No. 3 Georgia Bulldogs who will be facing off in 2018 College Football Playoff Semifinal at the Rose Bowl Game presented by Northwestern Mutual in Pasadena, CA.

Oklahoma finished the regular season with a record of 12-1 and claimed the Big 12 Conference title, while Georgia defeated Auburn to win the SEC Championship, also finishing with a 12-1 record. Before meeting on the field for the first time ever, the teams met for their first official pre-game appearance in a ceremony at Disney California Adventure, hosted by former all-pro and host of ESPN SportsNation, Marcellus Wiley.

Along with the festive ceremony, the football players had the opportunity to experience the fast-paced thrills of Guardians of the Galaxy – Mission: BREAKOUT!, which has been a huge hit with guests since opening at Disney California Adventure in May, 2017. The players joined Rocket in attempt to save his friends, the Guardians, from the Collector’s Fortress.

The Rose Bowl Game, a legendary part of college football, will host the College Football Playoff Semifinal for the second time. The first time was in 2015, when the Oregon Ducks defeated the Florida State Seminoles, 59-20.

The victors in the 2018 Rose Bowl Game will head to Atlanta, Ga., to play against the AllState Sugar Bowl champions in the College Football Playoff National Championship at Mercedes-Benz Stadium − home to the Atlanta Falcons − on Monday, Jan. 8, 2018.