Guest yells “Lock Him Up” during Hall of Presidents Show 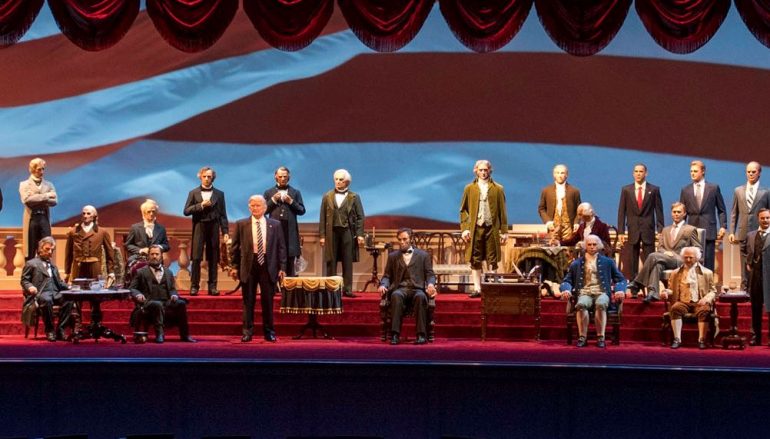 A revised Hall of Presidents at Walt Disney World’s Magic Kingdom just reopened a few weeks ago with a robotic representation of Donald Trump giving a speech on stage in front of 43* other Presidential audio-animatronic figures. Even before Trump moved into the White House, the Hall of Presidents had become a bit of a touch point between audience members who reacted one way or another to the favorite, or most hated, President on stage (Taft, perhaps, deserving more than he gets).

Eventually one of those outbursts would be directed at Trump and caught on video. That moment was today as we see in this video on on YouTube where a guest is heard yelling “Lock him up” during the show.

I love the guest yelling, “he’s not real!” By the end of this video it appears that a scuffle breaks out. Not sure if it’s Disney Security reaching the yelling guest or someone in the audience taking offense more directly?

Additionally there is a video that appears to be from the protestor himself. He starts yelling at the 1:21 minute mark.

I protested @realDonaldTrump at the #hallofpresidents cuz I'll never get this close in real life probs. #lockhimup pic.twitter.com/jKOQShIdz8

You can hear another guest in there who was less charitable calling the protestor an asshole. Malsky’s twitter page indicates that he is a character actor from New York, NY. Last week he asked his followers what he should throw at Trump when he visited Disney World and had a chance to go on the Hall of Presidents attraction.

I feel sorry for the cast members that have to endure the bad feelings the controversy around the current President’s time in the White House stirs in communities that are feeling oppressed by his policies. For a while Disney has security guards stationed inside the theater. I don’t know if they were still there for this show.

While I don’t blame people for speaking up in protest, I’m not sure an attraction in the middle of the Magic Kingdom is the place to do it. The show is not about any particular President, rather it’s about how the American people and the concept of a functioning democracy was uniquely born and endures in the United States. Protesting at the Hall of Presidents show is in some way protesting the very system that makes us free.

When they decided to re-open the Hall of Presidents, the right call in my opinion, Disney was in a no-win situation. If they gave Trump a non-speaking role, that could have been interpreted as a controversial move. On the other hand, we now can be sure that having him speak will lead to more moments like the that were caught on video today. Perhaps Disney needs to take another swing at this version of the show to downplay the controversy?

We’re endeavoring to find out what happened to the protesting guest and will update here if we do.

*Note: Grover Cleveland served as President twice in two non consecutive terms, but there’s only one AA of him