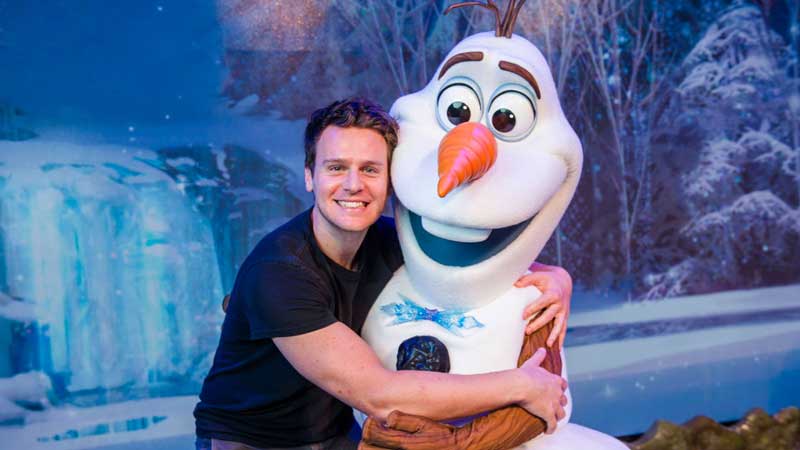 By George! Actor Jonathan Groff visited Walt Disney World earlier this month. Groff was photographed with Olaf the snowman who likes warm hugs from the Disney movie Frozen, where Groff provides the voice of Kristoff and Sven (the reindeer). Groff has also been recognized recently for his role of King George III in the Broadway hit — Hamilton, which ended in 2016.

Groff’s returned to lend his voice to Kristoff and Sven in the animated mini-feature “Olaf’s Frozen Adventure” which will open in theaters with Pixar’s Coco on November 22. In the movie Olaf and Sven embark on a hilarious journey to find the perfect holiday traditions for Anna and Elsa who realize that as a new family, they don’t really have any.

If you’re visiting Walt Disney World, you’ll enjoy seeing three songs from the animated mini-feature in the new finale for “For the First Time in Forever: A Frozen Sing-Along Celebration” at Disney’s Hollywood Studios. There is also a song from the short in the Sunset Seasons Greetings projection show on Sunset Blvd.

Groff can also be seen as Holden Ford in the new Netflix show Mindhunter.