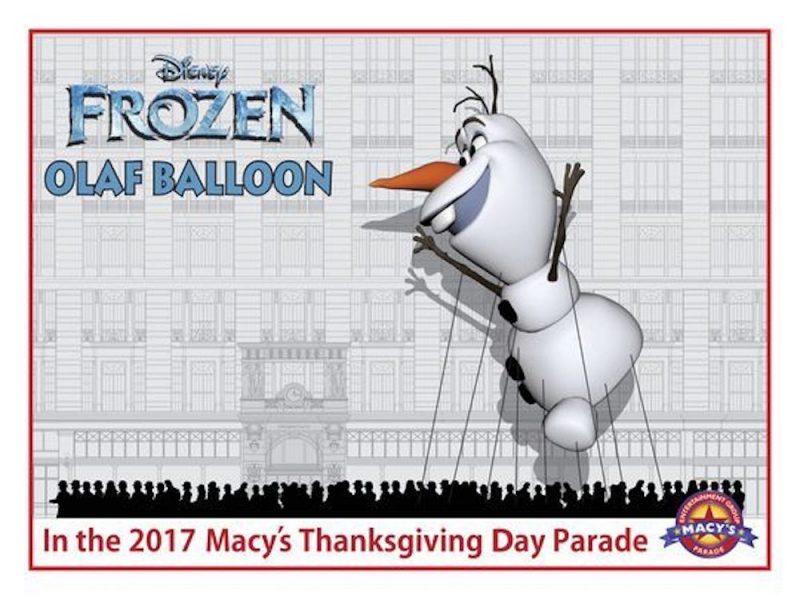 No, it’s not a scene from a Disney remake of Ghostbusters; but Olaf, the snowman with his own personal flurry from Disney’s “Frozen,” will soon be floating across the New York City skyline as a giant balloon. The magical snowman will be looking for warm hugs in the 91st annual Macy’s Thanksgiving Day Parade. He will join 3 other new pop-culture balloons in this year’s parade.

The sketch that was used to influence the design of the Olaf balloon was drawn by Chris Buck, the director of “Frozen.” In the movie Olaf was voiced by Josh Gad, who himself has ties to Broadway.

“Having an Olaf balloon alongside Mickey, Elmo, and Big Bird is a dream come true and something that, because (the parade’s) so storied and has such a long tradition, I now get to share that with my own kids,” says Josh Gad.

Walt Disney Animation Studios Director Chris Buck explains the design process behind creating the new Olaf Balloon for the Macy’s Thanksgiving Day Parade. Buck was co-director for “Frozen,” “Frozen Fever,” and the upcoming “Frozen 2.” His first film as co-director for Disney was “Tarzan.”

As Director and designer of the balloon, Buck will get to help escort the giant Olaf Balloon down the parade route. That’s pretty cool.

Olaf will make his Macy’s Thanksgiving Day Parade debut shortly after his new animated mini-feature, “Olaf’s Frozen Adventure,” debuts as the side feature to Pixar’s “Coco” on November 22 at a theatre near you. The 22-minute animated story continues the story of the original Frozen. With holidays on the horizon, Olaf scours the kingdom to find the best family traditions so that Anna (voiced by Kristen Bell) and Elsa (Idina Menzel) can have a magical Christmas.

Work on a feature-length sequel to Disney’s animated mega-hit “Frozen” is also well-underway with actors already recording lines for Walt Disney Animation Studios artists to animate. The movie is currently scheduled for a 2019 premiere.

Catch Olaf on your TV when the Turkey Day parade tradition kicks off at 9am on NBC.