A new 700-room hotel was just announced for the Disneyland Resort. It is planned to be a Four-Diamond hotel and will open in 2021 at the west end of the Downtown Disney District of Disneyland Resort. Disney hopes the sophisticated design will be a game-changer for Anaheim with new dining, entertainment, and hotel experience for resort guests and local residents.

The concept art shows extensive landscaping and water elements used across the hotel grounds with a heavy emphasis on shade structures and gardens. It will tie directly into Disneyland’s monorail system with its own access to the monorail platform for transport into Disneyland itself.

The hotel feels like it has been plucked out of the Mexican Riviera with its multi-layer balconies and hanging gardens. It’s hard to get a sense for scale looking at the view from above, but the second concept art released shows how massive the building is. The retail buildings underneath are at least a story tall and there is space above them before you get to the hotel tower itself. 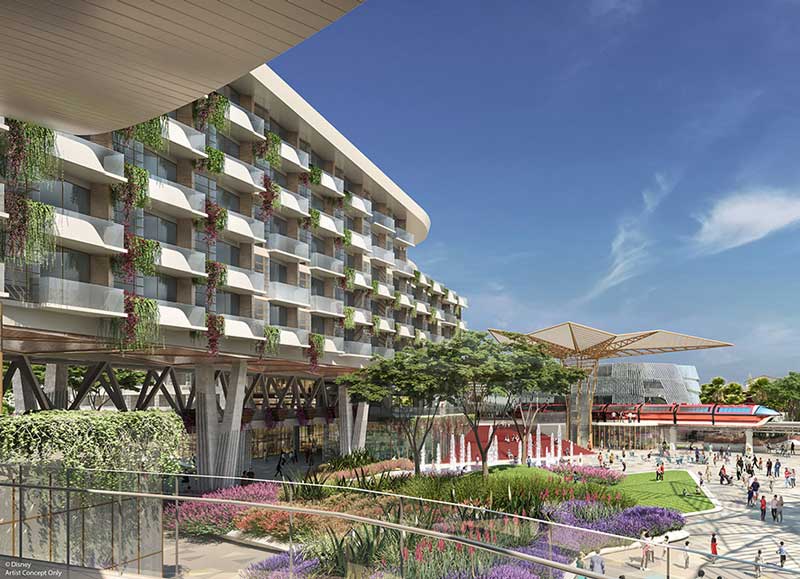 Judging by the concept art, much of what you enjoy about Downtown Disney near the hotel will be replaced with the hotel. Although Disney hasn’t announced anything, it looks like gone is the ESPN Zone, Rainforest Cafe, AMC Theatres, Earl of Sandwich, etc. The announcement does say that there will be retail and dining on the ground floor (as with the Grand California Resort), so it’s possible these business will remain, but it will be a very different look. I also see some rooftop dining opportunities (great for fireworks viewing).

The new development starts just over the bridge and will include a transformed Monorail station. It looks like the LEGO store survives, but that’s about it. The loading and unloading zone for Downtown Disney, part of the Disneyland Hotel’s parking lot will go away too. In the far back left of the concept art, you’ll see a new parking garage, probably designed to hold guest and cast member parking.

Also interesting to note that the previously announced luxury resort hotel that was scheduled to be built between Downtown Disney and the Mickey and Friend’s parking lot, does not show up on this concept art. Given it has the same number of rooms, and the same diamond rating, I suspect this is a replacement for that idea and will try to get confirmation. This wouldn’t be the first time a hotel was announced by Disney but ended up being built as something else.

No word on a name for this new hotel, but with four towers of its own, it is certainly massive. Construction is expected to begin in 2018.

previousNew Star Wars The Last Jedi Behind The Scenes Featurette
nextDisneyland ends plans for one parking structure, adds another