Robert Guillaume, voice of Rafiki in The Lion King and its sequels, dead at age 89 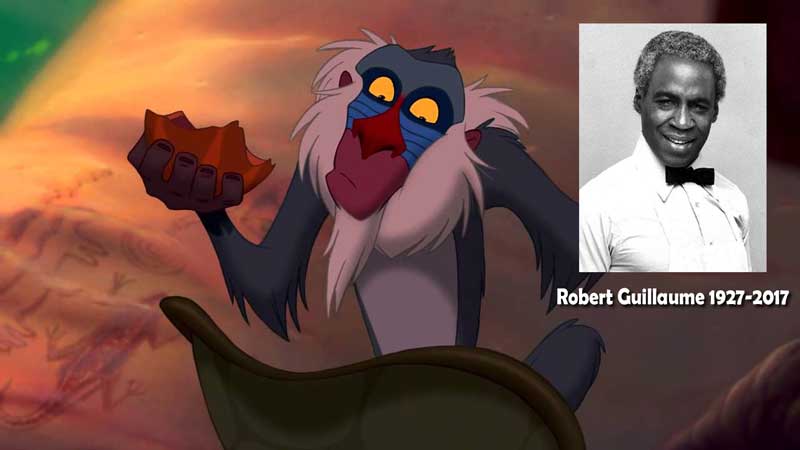 Actor Robert Guillaume died at age 89 today. Guillaume is best known to Disney fans as the voice of Rafiki the Mandrill in The Lion King animated feature and its two sequels. Guillaume won a Grammy for his work on The Lion King read-a-long book in 1995. He also played White House Secret Service agent Wilkes in the Disney movie “First Kid” in 1996.

Best known for his long television career including a series-regular spot on ABC’s “Soap” which he parlayed into a spinoff series called “Benson,” Guillaume was known for his dry sense of humor and worth ethic. More recently he played TV executive Isaac Jaffe on Aaron Sorkin’s critically acclaimed “Sport Night,” also on ABC.

With a career that spanned more than 50 years on stage (including a stint as the Phantom in Andrew Lloyd Webber’s “Phantom of the Opera”), television, and film, he is a talent that will be missed for years to come. Our deepest condolences to his family and friends.

Celebrity reactions are coming in:

Giant of stage + screen. Also let's remember that Robert Guillaume was among the first celebs to appear at AIDS fundraisers. Thank you, sir. pic.twitter.com/Zu1klgGAV3

RIP Robert Guillaume….he was the first Phantom of the Opera I ever saw when it came to Los Angeles. Great actor.