Star Wars returns in force to Disneyland Paris in 2018 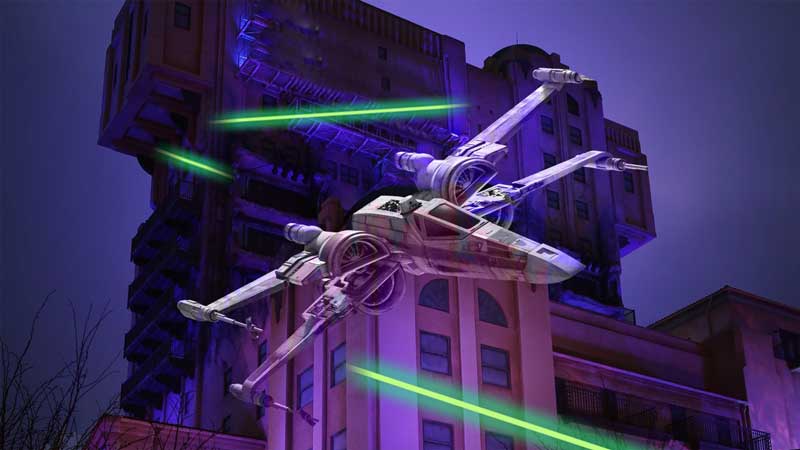 Disneyland Paris Resort is bringing back a favorite seasonal event from last year – “Star Wars Seasons of the Force” will return in 2018 to help place you in the middle of an intergalactic adventure. The 2018 edition will have eight Star Wars themed experiences that will make you the hero of your family when you visit the park.

Season of the Force is three months devoted to Star Wars films in the two Disney parks. You can find yourself face to face with Darth Vader and the Stormtroopers, propelled at the speed of light on Hyperspace Mountain and Star Tours: The Adventures Continue and dazzled by the spectacular show projected onto the architecture of the Hollywood Tower Hotel.

The unmissable, open-air projection is making its big come-back at Walt Disney Studios Park on 13 January 2018. Better yet: it will include new scenes, taken directly from the new film, Star Wars: The Last Jedi.

Just imagine Walt Disney Studios Park lighting up in true Star Wars style at nightfall with a breathtaking sound and light show. Film projections, special effects and, of course, the Star Wars characters on stage! The legendary characters of the Empire, the First Order and the Resistance will make an appearance in this show celebrating the heroes of the saga. Don’t miss it!

This production is offered several times a day and brings a number of the saga’s legendary characters into the spotlight on stage. Chewbacca, C-3PO, R2-D2, Kylo Ren, Darth Vader and many more will be present in person for this fascinating show at Production Courtyard in Walt Disney Studios Park.

The days at Walt Disney Studios Park are punctuated by epic appearances by Star Wars characters. Starting with the “First Order March”, a parade of Stormtroopers, led by the daunting Captain Phasma.

A perfect opportunity to interact with the fearsome Stormtroopers. They patrol several times a day at Production Courtyard in Walt Disney Studios Park.

At the Disneyland park you’ll find:

Cutting-edge technology, digital 3D imagery, Audio-Animatronics characters, special effects, epic music and more… this journey is a total immersion into the many worlds of Star Wars. The Force is truly strong with Star Tours!

For the 25th Anniversary of Disneyland Paris, Star Wars combined with an iconic Space Mountain to become Star Wars Hyperspace Mountain. With this new adventure, guests to Disneyland Park take flight to meet up with the famous Rebel Alliance and experience an epic expedition.

Meeting the Dark Side of the Force

Good news: you can stand up to Darth Vader at any age in Star Port! Come face to face him every day in a specially designed location in Discoveryland, near Star Tours: The Adventures Continue. A word of advice for your private meeting: don’t drop your guard when the photo is taken.

Nightfall also means a dazzling show in Disneyland Park: Disney Illuminations. This original show, inaugurated for the 25th Anniversary of Disneyland Paris, includes sound and light shows, projections, water fountains and fireworks to take your breath away. You will be guided through a multitude of adventures, particularly in a galaxy far, far away, featuring the Millennium Falcon, TIE Fighters, Stormtroopers and more. The Force is with you at Disney Illuminations, with a sequence of live action shots to delight all Star Wars fans.

Prepare to become the hero of your very own Star Wars adventure from 13 January to 25 March 2018 with the Season of the Force, only in the two Disneyland Paris parks!