The first official Make-A-Wish® Shanghai wish was granted at Shanghai Disney recently, which hosted Yuanbao, a seven-year-old boy, and his family from China’s Anhui Province

His wish was to meet Olaf from the hit Disney animated film Frozen, and Shanghai Disney did that and more.

At the Royal Banquet Hall in the Enchanted Storybook Castle, Olaf together with his best friend Elsa, made a surprise appearance and greeted Yuanbao in person, making his magical dream finally came true.

Together with his family, Yuanbao went on to spend several fun-filled hours at the theme park, riding Dumbo with Mickey Mouse, being the parade Grand Marshall with his parents, and receiving warm welcomes from all Cast Members from the resort. 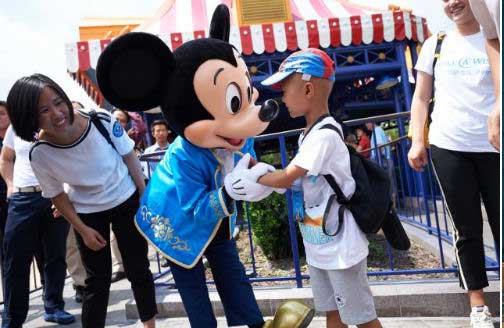 “Disney’s history of wish granting began when Walt Disney opened Disneyland Park and hosted children from around the world, and we are pleased to bring this legacy to Shanghai,” said Philippe Gas, general manager of Shanghai Disney Resort, in a press release “We are proud to play a role in bringing smiles and laughter to wish children and their families, and will continue to work closely with approved nonprofit wish-granting organizations to help make transformational wishes come true.”

This also marks the first official wish granted by the Disney Wish Program at Shanghai Disney Resort, launched earlier this year and designed to support children with life-threatening medical conditions in mainland China, helping to make life-changing wishes come true and bring hope, magic, and joy to children when they need it most.

It looks like Yuanbao and his family had a wonderful time.

previousThor: Ragnarok is Coming, But What’s Next from Marvel Studios?
nextMarvel’s The Punisher coming to Netflix in 2017… but when?