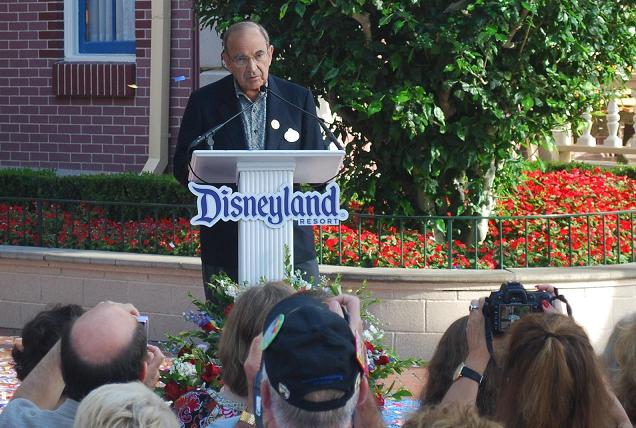 Marty Sklar was a staff writer at the UCLA’s Daily Bruin newspaper when he heard about Disneyland. One month before the park opened, Sklar got a position writing The Disneyland News, sold in the park to guests, before joining the park’s publicity team and eventually finding his way to WED Enterprises, the Disney division we now know as Walt Disney Imagineering. Before he left, he had shepherded the Walt Disney Company through every theme park opening in its history until he retired in 2009, the same year he finally received his Disneyland credit with a window on Main Street USA.

Sklar was a big shaper of the Disney theme park image. He was a lead writer for Walt Disney’s vision for Walt Disney World, including the script for the 20-minute film that documented the original idea for EPCOT. In 2001 Sklar was inducted as a Disney Legend.

In his retirement role as Walt Disney Imagineering Ambassador, Sklar was a regular guest at Disney fan events. He was the type of speaker who could warm the crowd with humor and provide unique first person inside into the early days of the creation of a brand new creation on earth – the theme park. He also frequently dispensed with advice on how to be creative and have success.

In his life post-Disney, Sklar also wrote books including, “Dream it! Do it!: My Half-Century Creating Disney’s Magic Kingdoms,” and “One Little Spark: The Road to Imagineering.” His stories and insights will live on there for future generations to discover on their own.

“Everything about Marty was legendary – his achievements, his spirit, his career,” said Bob Iger, Chairman and Chief Executive Officer, The Walt Disney Company. “He embodied the very best of Disney, from his bold originality to his joyful optimism and relentless drive for excellence. He was also a powerful connection to Walt himself. No one was more passionate about Disney than Marty and we’ll miss his enthusiasm, his grace, and his indomitable spirit.”

“Marty was the ultimate Disney Imagineer and Cast Member. From his days working as an intern with Walt to just two weeks ago engaging with fans at D23 Expo, Marty left an indelible mark on Disney Parks around the globe and on all of the guests who make memories every day with us,” said Bob Chapek, Chairman, Walt Disney Parks and Resorts. “He was one of the few people that was fortunate to attend the opening of every single Disney park in the world, from Anaheim in 1955 to Shanghai just last year. We will dearly miss Marty’s passion, skill and imaginative spark that inspired generations of Cast, Crew and Imagineers.”

Bob Weis was one of those Imagineers. “Marty was one of Walt’s most trusted advisors and helped turn his most ambitious dreams into reality. For us, it’s hard to imagine a world without Marty, because Marty is synonymous with Imagineering,” said Weis, President, Walt Disney Imagineering. “His influence can be seen around the world, in every Disney park, and in the creative and imaginative work of almost every professional in the themed entertainment industry.”

Personally speaking, Sklar worked under my Grandfather at Imagineering and later was kind enough to interview me when I was seeking my own career at Disney. The Disney community will greatly miss Marty and we here at The Disney Blog wish to extend our deepest condolences and thanks to his friends and family for sharing him with us for so long.

Here’s how people are reacting online:

We've lost one of the most significant living links to Walt Disney and his philosophy. I'll miss hearing his stories #MartySklar https://t.co/wanjYrbhu0

We are so saddened at the passing of our Co-Founder, Marty Sklar. Our thoughts are with the Sklar family. https://t.co/F9O8dWvTgu

Industry giant Marty Sklar has passed away. Our condolences to his family and community. pic.twitter.com/BDomwUQHxk