Some of the world’s top nature filmmakers joined forces with the Walt Disney Company to make four animal families the star of their latest true-life adventure film – Born in China. “Born In China” transports audiences to some of the world’s most extreme environments of China where few people have ever ventured to witness wildly intimate and adorable moments in the lives of three animal families – a doting panda bear mother, a 2-year-old golden snub-nosed monkey, and a mother snow leopard. Narrated by John Krasinski (“The Office”), Disneynature’s newest movie journeys into homes on Digital, Blu-ray Combo Pack and On-Demand on August 29. 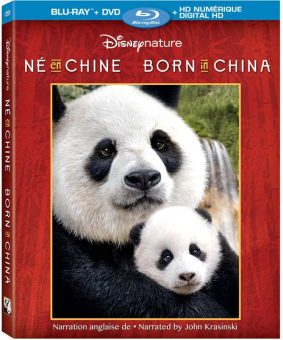 “Born in China” is the seventh theatrical release from Disneynature, which brings the world’s top nature filmmakers together to share wildlife stories that engage, inspire and educate. The breathtaking footage and high-definition quality picture is captivating for audiences of all ages and is a must-add to the in-home collection.

Furthermore, the in-home release comes packaged with all-new bonus features that take viewers deeper into the making of a true-life adventure film, showcasing the extreme measures it took to travel, film, observe and encounter these amazing animals in their natural habitats in the far northeast China; Showcases how Disneynature and the Disney Conservation efforts behind these films have helped make a difference around the globe; and features the full music video by “American Authors” end-credit song “Everything Everything.”

In continued efforts to help protect the wild animals featured in the film, Disneynature through the Conservation Fund has made a contribution to World Wildlife Fund (WWF) to focus efforts that benefit wild pandas and snow leopards.

DisneyNature can sometimes be one of the overlooked labels at Walt Disney Studios, but it is carrying on an important tradition of true-life stories started by Walt Disney himself. We’re happy to see it still going and will probably add this DVD to our collection, how about you?

*Bonus features may vary by retailer