The vast majority of reviews for Disney’s Animal Kingdom you find on Google Maps are 5-star positive remarks, often filled with tips that will make your experience better. The critical reviews of Disney’s Animal Kingdom on Google are much fewer, but they do contain some real gems. People who ‘bought’ Fast passes, struggles with long lines, crowded walkways, lack of shade, rude cast members, and lately complaints about guest confusion when evacuated from the new rides in Pandora. The complaints are a litany of guests who either don’t take the time to plan or expect Disney to make an exception for them because they’re a special case.

Among those serious complaints is one single-star review that, when read in a certain light, is actually a big win for the park. 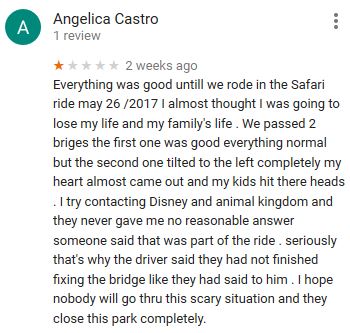 It’s likely this review is not authentic, the author has no other reviews on Google, regardless, we should all be able to suspend our disbelief long enough to actually think that these stories Disney Imagineers and cast members are telling us are real. Wouldn’t that be great, if just for a few moments.

Meanwhile, I hope Disney is reading the Google reviews and learning a few lessons about how customer experience could be improved.