Last night marked the official grand opening celebration for Guardians of the Galaxy – Mission: BREAKOUT! a thrill filled attraction that takes guests on a rescue mission to save the original Guardians of the Galaxy. The attraction replaced the forner Twilight Zone: Tower of Terror attraction completely transforming it inside and out. Day guests at Disney California Adventure will be able to board their adventure beginning May 27, 2017.

Guardians of the Galaxy – Mission: BREAKOUT! entices guests with an original storyline based on “Guardians of the Galaxy” films, comics and animated television series, with a rapid rise into chaotic adventure and surprising visuals. The fast-paced action rocks to the beat of music inspired by the films’ soundtracks, including classic rock and pop music from the ‘60s, ‘70s and early ‘80s. And with multiple ride profiles, guests never know which adventure they’ll get.

“Guardians of the Galaxy – Mission: BREAKOUT! brings an all-new epic adventure to the Disneyland Resort, and it’s the only Disney park in the universe where guests can step into a Guardians of the Galaxy story,” said Bob Chapek, chairman of Walt Disney Parks and Resorts. “Like the smash-hit films that inspired it, this new attraction is action-packed, full of irreverent humor, and features an ‘awesome mix tape.’ It’s a fantastic way for guests to experience the Super Hero universe like never before.” 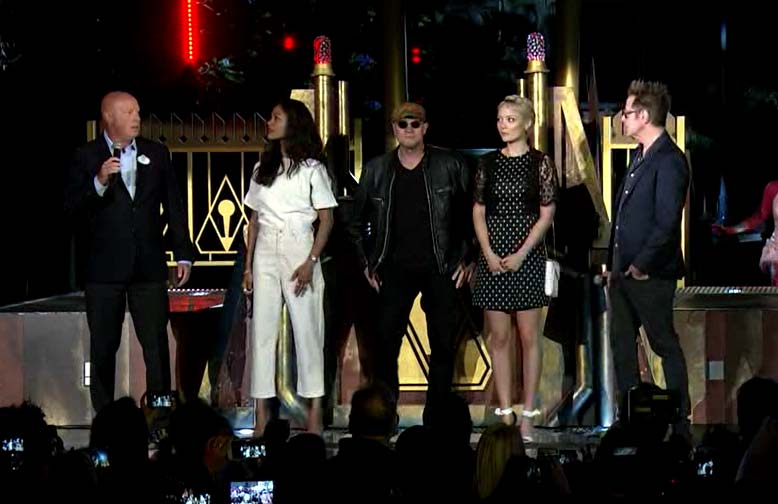 Walt Disney Imagineering collaborated with James Gunn, director of the “Guardians of the Galaxy” films, Kevin Feige, president of Marvel Studios, most of the main talent from the films along with Joe Quesada, chief creative officer, Marvel Entertainment, and Marvel Themed Entertainment on the story of the attraction, to develop an experience where guests step into a story with these characters for the first time.

“I can’t be more pleased to have partnered with Walt Disney Imagineering in bringing the Guardians of the Galaxy characters to this new, immersive form of storytelling,” Gunn said. “It’s been exciting and a lot of fun to help direct and shape the experience so that it has all the heart and fun and humor of the Guardians movies.” 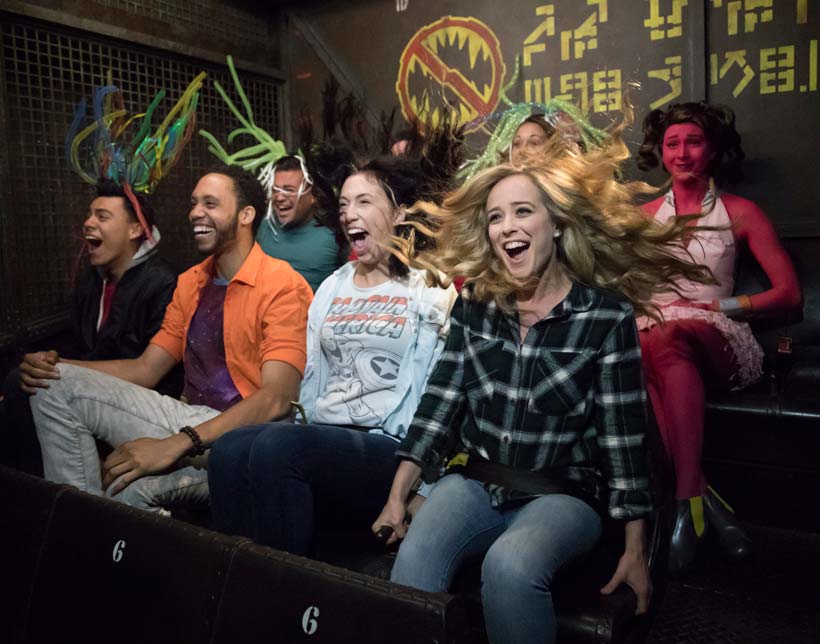 In addition to the new attraction, Summer of Heroes begins May 27 with Guardians of the Galaxy characters and Super Heroes appearing in Disney California Adventure for new exploits and Heroic Encounters. While some of these will be year-round, others will be available only from May 27-Sept. 10. Summer of Heroes inaugurates an ever-expanding universe of Super Hero stories at Disney California Adventure that will become even bigger over time.

The Guardians of the Galaxy – Mission: BREAKOUT! adventure begins as guests enter a grandiose, 183-foot tall fortress. They discover that the Guardians have been imprisoned by the arrogant, acquisitive Taneleer Tivan, known as The Collector. Guests join a daring escape plan devised by Rocket, who once again proves his uncanny ability to break free from any prison or captivity. 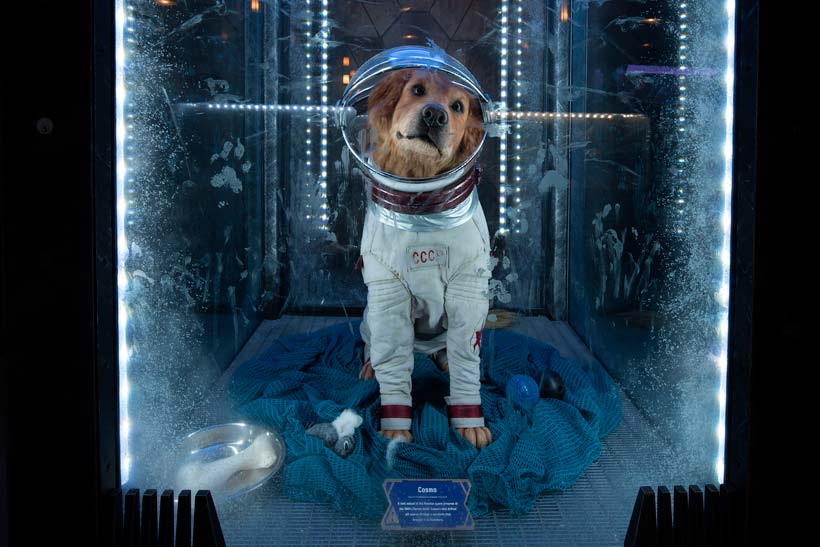 If you can’t read the plague for Cosmo it says “A test animal in the Russian space program at the 1960’s {Terran date}. Cosmo’s ship drifted off course through  a wormhole that brought it to Knowhere.”

The dominating fortress is adorned with antennae, satellite dishes and other mysterious apparatus and is accented in shimmering hues of blue and gold. At night, with special lighting, it pulsates with imposing power. A gilded, eight-foot-tall statue of The Collector stands at the entrance to the fortress, towering over guests. These VIP guests of The Collector enter to view the unique “Tivan Collection” of relics and species from all over the universe. His latest acquisition: The Guardians of the Galaxy.

The Lobby of the fortress is both fascinating and creepy – filled with display cases that hold artifacts and living creatures, which The Collector has obtained and made available for public viewing. In a welcome video, The Collector explains how he has trapped the Guardians of the Galaxy high atop his fortress in secured glass cages that are wired with power from a massive generator and suspended over a deep abyss.

Before leaving the Lobby and entering The Collector’s Office, guests hold up their hands to be “bio-scanned” for security clearance. In the Office, even more of The Collector’s relics are on display and, as in the Lobby, the collection contains some hidden references that will delight dedicated Super Hero fans and Disney fans. 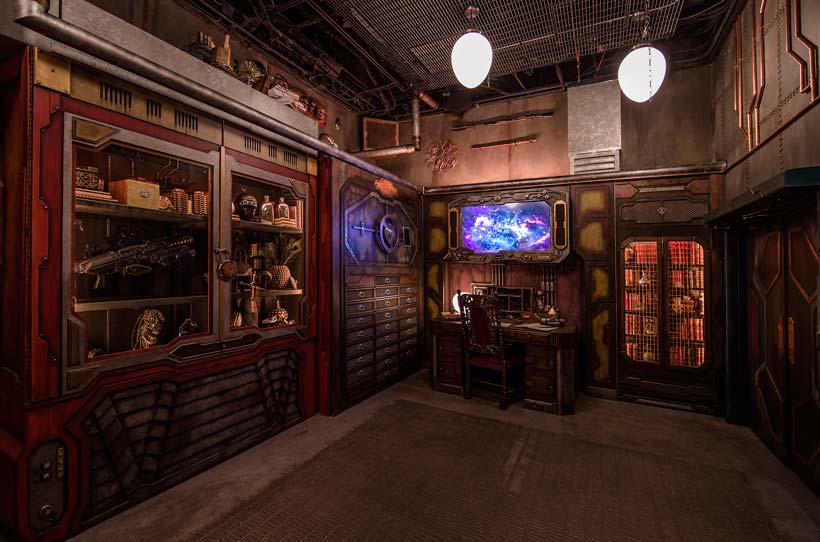 Suddenly, Rocket appears, telling guests he needs their help. Using their security clearances, he can hijack the gantry lift to the top of the fortress, disable the generator, and free his friends. 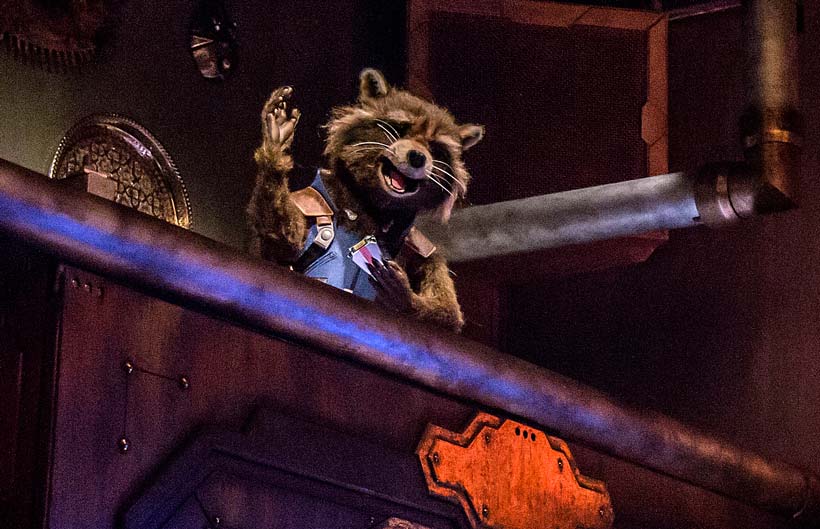 Of course, Rocket’s plan faces challenges. After guests enter the gantry lift, Rocket overrides The Collector’s recorded tour spiel with music from the tape player of Star-Lord (aka Peter Quill). Soon, the gantry is shooting up into the fortress, then plummeting downward as Rocket attempts to take control of the generator.

It’s here that guests experience one of the attraction’s six different ride profiles, each synchronized to one of the songs on the “awesome mix tape.”

Guests soon learn that, even if the rescue is successful, the resulting chaos may create problems of its own!

To help create the attraction, Disney Imagineers used Virtual Reality technology to pre-visualize the Tivan Collection, The Collector’s Office and other parts of the Guardians of the Galaxy – Mission: BREAKOUT! experience.

The ride system has more high-speed ride time than ever before, and the thrill factor gets going as soon as the gantry lift doors close and the music stars blaring. Each song is accompanied by a different up-and-down ride profile and story scenes, making every visit to the attraction unpredictable.

Rocket makes multiple appearances in the attraction, including as a sophisticated Audio-Animatronics character who invades The Collector’s Office to ask guests for a hand with his escape plan.

From the anticipation guests will feel as they enter The Collector’s Fortress to the sense of discovery as they tour the Tivan Collection to the thrills and elation of participating in a successful breakout, Guardians of the Galaxy – Mission: BREAKOUT! is an unforgettable adventure into the Super Hero universe at Disney California Adventure.

When asked if the new attraction is part of the Marvel Cinematic Universe, Guardians of the Galaxy director James Gunn said no.

#GuardiansoftheGalaxy #MissionBreakout is the beginning of a new, separate & fun theme park universe & is not canon to the MCU. https://t.co/XhFZs49jBX

According to Gunn, the needs of a theme park attraction are necessarily competely different in tone from the Marvel Cinematic Universe. We think that’s a smart move, of course. Disney’s parks need to tell their own stories.

Tags:disney california adventureDisneylandGuardians of the Galaxyguardians of the galaxy - mission: breakoutImagineeringjames gunnmarvel
previousPowerful a capella rendition of “How Far I’ll Go” from Disney’s Moana released by Voctave
nextDisney plans $1 Million donation to restore wildlife habitats to celebrate opening of Pandora – The World of Avatar