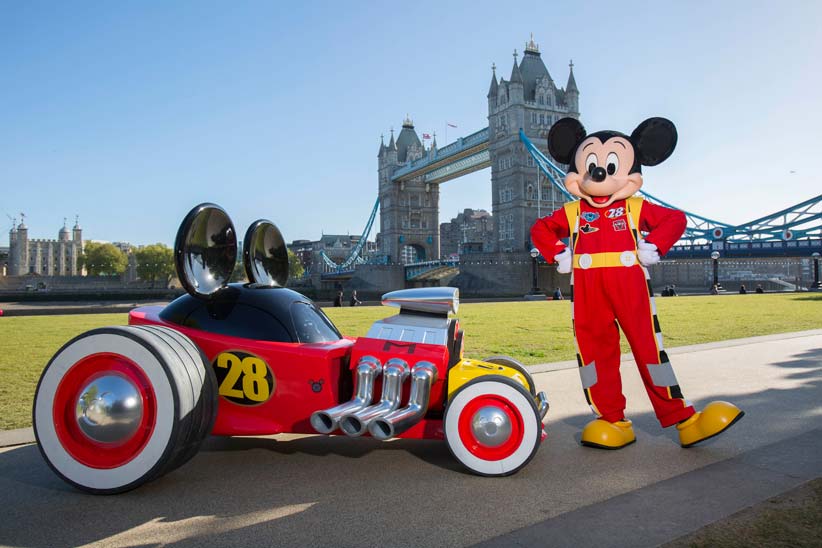 Mickey Mouse has been spotted out and about on the streets of London with his new Roadster Racer from the brand new animated series, Mickey and the Roadster Racers, on Disney Junior and DisneyLife. The animated series follows Mickey and pals – Minnie Mouse, Donald Duck, Daisy Duck, Goofy and Pluto – as they race across the globe on action-packed adventures, including a dash across London to stop a crown jewel thief.

Mickey’s Roadster – ‘The Hot Doggin Hot Rod’ – was spotted at various locations across the capital. Commuters were surprised to see it lining up at the taxi rank at Charing Cross station, at Southbank and stopping at a zebra crossing in central London to let families pass. Created by a specialist team of eight engineers and experts, the model car took eight weeks to build and was commissioned to celebrate the launch of Disney Junior’s new animated children’s series. The Roadster Racer model measures 2.4 metres in length, and features a ‘28’ on the side, which represents the year in which Mickey Mouse first appeared onscreen in ‘Steamboat Willie’ in 1928, 90 years ago next year.

In a special London themed Mickey and The Roadster Racers episode due to air on Disney Junior and DisneyLife in May, Mickey and the gang attempt to track down a thief who has stolen the crown jewels, before returning them to the Queen.

Do you watch Mickey and the Roadster Racers in your household? I could see myself driving Mickey’s Roadster around town, how about you?