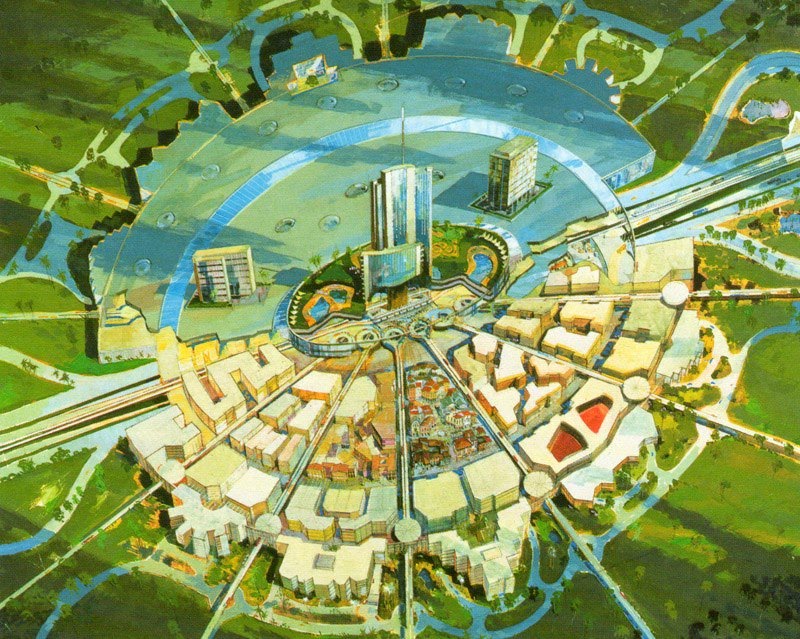 While the long gone Cherry Plaza hotel on Lake Eola in Orlando was the site where Walt Disney made the initial 1965 announcement that Disney had bought up a bunch of property south of the town, the actual plans for Disney World weren’t released until 1967 when Disney hosted press and government officials in a Winter Park movie theater for the only screening of the movie.

Disney history hunter Jake in Orlando takes us on a tour of the site where this film was shown and, later, public hearings were held:

Okay. That’s my gym and I had no idea of the great moment in Disney history all my sweat was co-mingling with. In a bit of mixed news, that shopping mall is currently getting a face lift. Who knows how much more of the original theater will be gone when the work is over.

If you want to reach the original clippings from the Orlando Sentinel’s Feb 3, 1967 edition, complete with full color renderings of EPCOT, you can find them on the Orlando Memory website.

Interesting that even after Walt’s death in 1966, his brother was still hoping to build the version of EPCOT you see in the model on the Peoplemover at Magic Kingdom. But Roy acknowledge that the theme park would have to come before the model city.

“We believe if we can get 8 to 13 million customers it will be a lot easier to attract industry,” said Roy Disney.

Part of what sold Florida on the idea of Walt Disney World was that EPCOT would be built and it would attract new businesses to the state. That’s why Disney has their own pocket government with many of the powers normally reserved for a city. (The book to read here is Project Future)

I wonder what those first journalists and government officials to see Disney’s pitch for Walt Disney World would think of the resort as it exists today.