Examining the mixed messages of Disneyland’s Pirates of the Caribbean

There have been a number of changes made to Disneyland’s Pirates of the Caribbean over the years, several of which have drawn a significant amount of criticism from some fans of the ride. Why is this? It’s still a popular attraction and considered to be one of the best dark rides of all time, so what is it about these alterations that upsets some fans so much? The first notable change one experiences while on the ride is a projection of Davy Jones from the Pirates of the Caribbean films that appears after we see some ill-fated pirate skeletons in a cave. The ghostly original voiceover by show writer Xavier “X” Atencio warns us that “Dead Men Tell No Tales”, yet the digitally projected squidman of corporate synergy says otherwise, literally arguing with the attraction’s creator. “Ahh, but they do tell tales, so says I.” says Jones. “If ye be brave or fool enough to face a pirate’s curse, proceed”. But we’ve already faced a Pirate’s’ curse. We already witnessed their ultimate fate in the caves, isn’t that a Pirate’s curse? What curse are you talking about, man? Then on to the Pirates storming the town.

Blackbeard, the textbook definition of a classic pirate, has been replaced with Barbossa from the film series, a character whose allegiance with good or evil varies from film to film, so his appearance isn’t quite as threatening. Right off the bat, he’s yelling about Jack Sparrow. 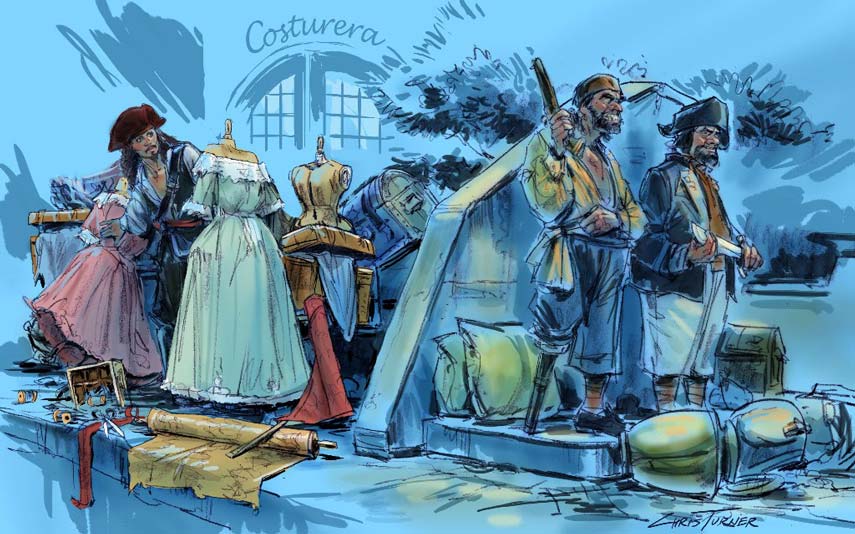 Jack makes a few cameos in the town, most of which would be relatively inconspicuous if not for many of the surrounding characters’ dialogue having been changed to be about trying to find him. He looks more realistic than the other Pirates, so having all of this attention called to him can cause a bit of a disconnect. But I don’t think his appearance takes a huge toll on the attraction until the end.

In the 1990s an effort was made to make the ride more “politically correct”, which mostly involved some changes in dialogue, and instead of a scene where Pirates chase some women, they chase some women holding food. Atencio considered these alterations as so drastic that he called this new version “Boyscouts of the Caribbean”.

But before the chasing scene is one where women are literally being auctioned off to the grungy pirates, which remains practically untouched aside from some technical upgrades. It’s a fixture of the ride; most of the animatronics are positioned here and it would require a lot of effort to alter the context of the situation, which would prompt even more fans to complain, so giving some of the ladies in the next scene some food and jewelry to hold was an easier way to quell complaints of sexism in the ride. The food can be pointed at as an example of “Hey, we tried”, but the Pirates themselves remain blatantly sexist. Which in the ride’s original context, they are punished for. After drunkenly burning up the town and terrorizing people, the Pirates’ antics catch up with them. Several end up in jail, others are implied to have killed themselves in careless gunfights, and all are made examples of for the guests. “Dead Men Tell No Tales”, as Atencio tells us in the opening narration. But now these scenes are capped off with Jack Sparrow sitting on a throne in a room full of treasure, toasting to a life of piracy. 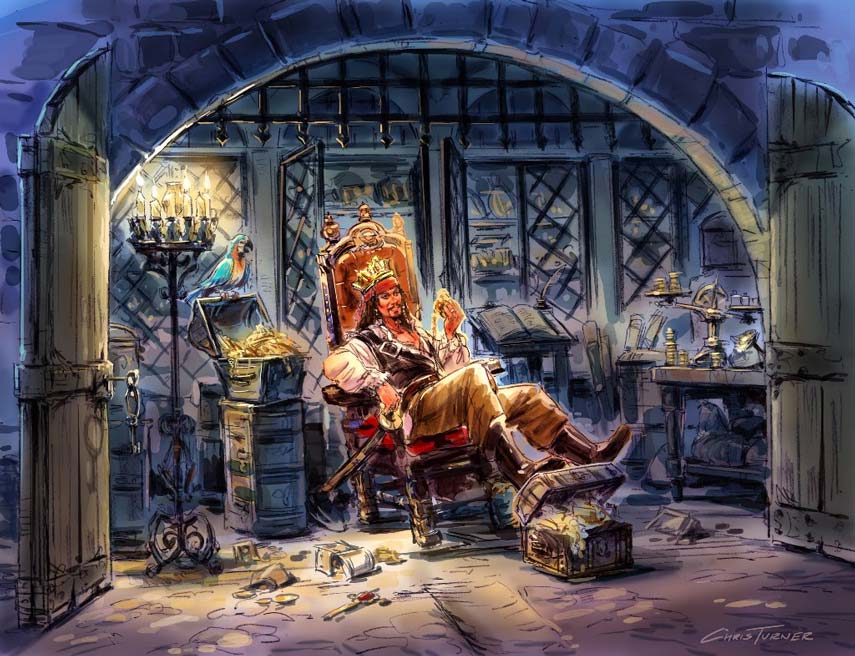 This is in direct contrast with the overall theme of the ride. The first half devotes so much time to showing the ultimate fate of the pirates- one of desperation, greed and misery, including a freaking skeleton sitting alone in a room full of treasure, still obsessing over its hoard even in death.

Fans of the Pirates of the Caribbean films might enjoy Jack’s final appearance in the ride, but unlike some of the other additions, this one alters its entire moral center. Jack Sparrow is a fun character in the films and does have a charming anti-hero quality about him, but putting the spotlight on that kind of personality during what is supposed to be a reflective moment is a poor decision; one that sadly many guests will fail to pick up on. Jack has been a part of the ride for over ten years now, and there are no signs of he’ll be removed anytime soon.

Then the Davy Jones voiceover whispers at us one last time, as does the On Stranger Tides version of Blackbeard, bringing the ride to a close on one last commercial tie-in.

I’m a fan of both the dark ride and the series of films, but I don’t think the two mix together very well. Shanghai Disneyland’s Pirates of the Caribbean – Battle for the Sunken Treasure is a fantastic translation of the film series’ characters and moods into ride form, but these characters and moods are far different from those of the original ride. As it stands, the original is a classic 60s dark ride reworked to showcase a film series from the 2000s, and its mixed messages just don’t sit well with me. Let us know your thoughts on the controversial changes that have been made to this beloved attraction!