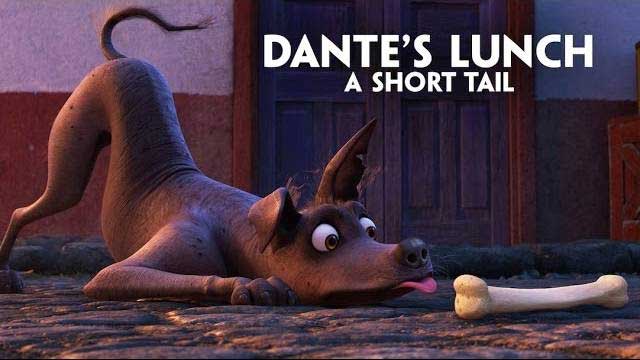 Pixar has released a new animated short that introduces animation fans to Dante, the dog that journey’s with the young boy Miguel to the land of the dead in the upcoming movie – “Coco.”

The new short “Dante’s Lunch – A Short Tail” features Dante the dog chasing after a bewitched bone until it lands him in a graveyard where the bone finds its home, as part of a skeleton person from the land of the dead.

That was cute and I think it did a good job of showing us Dante’s personality. Dante a Xolo (or Xoloitzcuintli), which is an ancient breed of dog that can be traced back to 3,500 years ago. According to director Lee Unkrich, the Xolo “figures very prominently in Aztec legends about the afterlife. It was said that in order to make the journey through the afterlife, you needed to have one of these Xolo dogs with you.”

The short was created by the team behind “Coco” to help flesh out Dante’s character. I think they succeeded.

Despite his family’s baffling generations-old ban on music, Miguel (voice of newcomer Anthony Gonzalez) dreams of becoming an accomplished musician like his idol, Ernesto de la Cruz (voice of Benjamin Bratt). Desperate to prove his talent, Miguel finds himself in the stunning and colorful Land of the Dead following a mysterious chain of events. Along the way, he meets charming trickster Hector (voice of Gael García Bernal), and together, they set off on an extraordinary journey to unlock the real story behind Miguel’s family history.

Pixar’s Coco opens in theaters in the U.S. on November 22. The film is co-directed by Adrian Molina (story artist Monsters University) and produced by Darla K. Anderson (Toy Story 3).