I’ve seen a lot of great LEGO sets on Lego Ideas, but very few are dioramas. To help celebrate the 20th Anniversary of Pixar’s “Toy Story” and the upcoming release of “Toy Story 4,” Lestyn Pocock decided to bring it all back to where it began, Andy’s room. In addition to being the perfect place for your favorite Toy Story mini figures, Lestyn has included some brick built versions of “RC” and “Mr. Potato Head.”

A life-long LEGO fan, Lestyn hails from Northhamptonshire region of the UK. He first created this diorama to display at LEGO shows he attends in the UK. “I got a lot of positive responses about “Andy’s Room” and people saying how good a set it would be so i decided to put it onto Lego Ideas,” said Lestyn. “There are a few diorama sets from LEGO such as “The Big Bang Theory” and some Marvel/DC ones so I thought they are a great set for Adults to display and also for kids to play with.”

There’s a lot of detail in this project, Lestyn estimates it will take about 1-2 hours to build the set once you get it home. 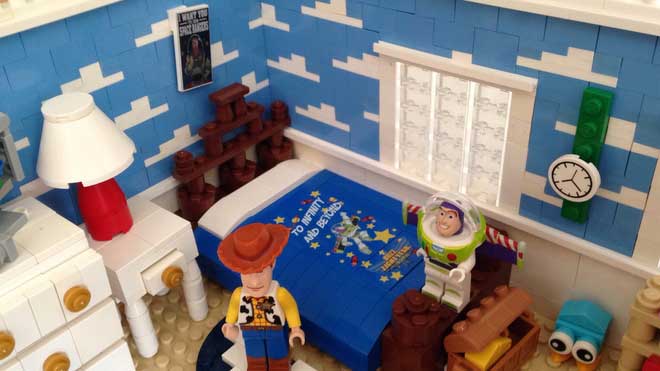 But before you get Andy’s Room home, it needs your help to have a chance at being an actual LEGO brick set that’s sold in stores. All you have to do is create a free LEGO Ideas account and vote for the set. Once it reaches 10,000 votes, LEGO has to consider it for a real kit. It’s already more than a quarter of the way there, so let’s help take this diorama of Andy’s Room to Infinity and Beyond.