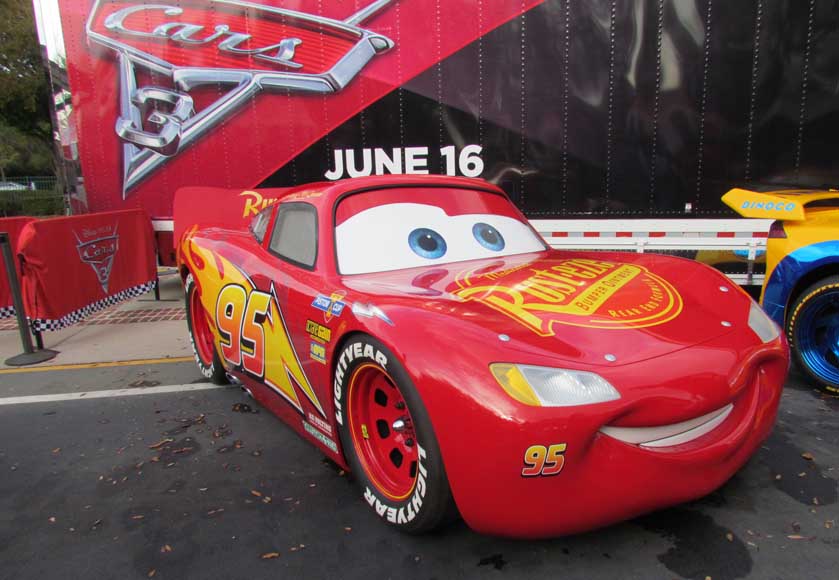 A new traveling tour “Road to the Races” promotes the upcoming Pixar film “Cars 3.” It took the green flag this weekend at Disney Springs. Located near the Once Upon A Toy store, there are booths with games and activities for kids toddler age up to those who are just young at heart. The two biggest attractions are a movie preview inside a custom trailer movie theater and photo opportunities with three of the movie’s stars: Lightning McQueen, Cruz Ramirez, and Jackson Storm.

For me, the best part of the event is the 12-minute look at “Cars 3” from the director and producers of the movie. The preview contains interviews with Pixar team members, a number of short new clips, and one extended clip at the end. 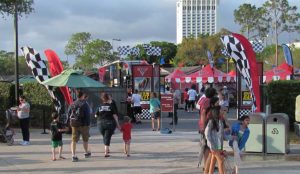 Enter by Earl of Sandwich 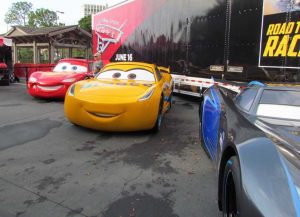 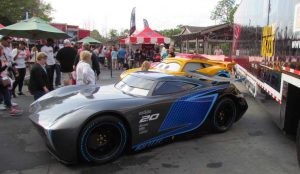 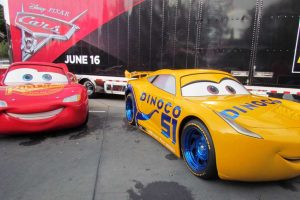 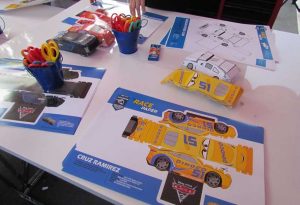 Fun crafts to build your own car 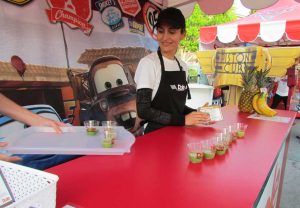 Dole had smoothies to try 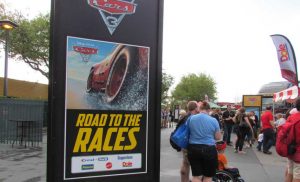 The first Cars was a love letter to Route 66 and small town America. The sequel was a goofy spy film. This time the talented folks up in Emeryville had made a real love letter to the very American roots of racing.

Everyone who ever tinkered on a car all week only to enter it in a jalopy race or demolition derby on Saturday night, attended a small track race, or dreams of driving at the high speeds of today’s modern sports cars will find something to love in this movie.

It was also immediately apparent the quality of animation has significantly improved since we last saw Lightning McQueen and his friends. The preview is in 2D but there was one scene where I could swear the movie was in 3D, the animation was that good.

Btw, as you watch the extended clip, keep a sharp eye out for the Pizza Planet Truck.

The preview put nearly all my fears to rest. “Cars 3” might be among the top three Pixar films before all is said and done. I can already feel the tears coming.

I don’t want to say much more for fear of spoilers. But if you look closely at some of the promotional materials, including at the “Road to the Races” event you can sort of figure out the story line.

Get more details on the Road to the Races Cars 3 event here. The last day is March 26, the Lightning McQueen and his friends pack up for their next destination.

Blindsided by a new generation of blazing-fast racers, the legendary Lightning McQueen (voice of Owen Wilson) is suddenly pushed out of the sport he loves. To get back in the game, he will need the help of an eager young race technician, Cruz Ramirez (voice of Cristela Alonzo), with her own plan to win, plus inspiration from the late Fabulous Hudson Hornet and a few unexpected turns. Proving that #95 isn’t through yet will test the heart of a champion on Piston Cup Racing’s biggest stage! Directed by Brian Fee (storyboard artist “Cars,” “Cars 2”), produced by Kevin Reher (“A Bug’s Life,” “La Luna” short) and co-produced by Andrea Warren (“Lava” short), “Cars 3” cruises into theaters on June 16, 2017.