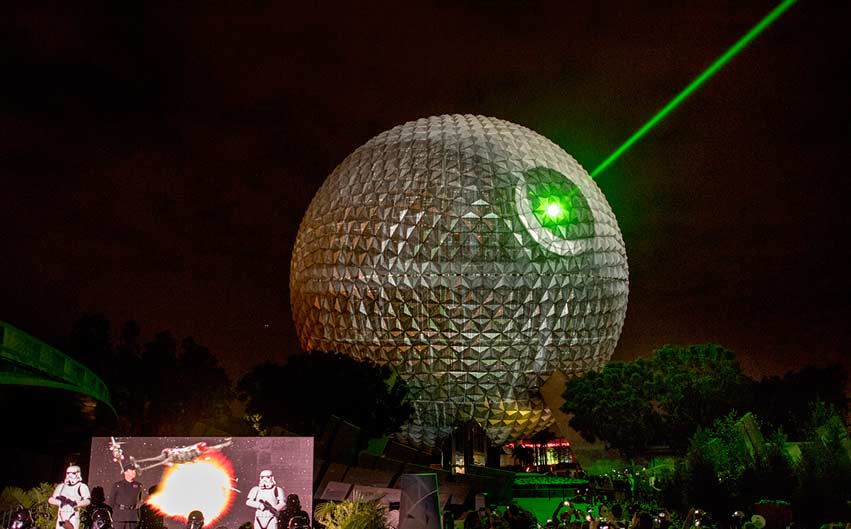 If someone was even a casual Star Wars fan, they wanted to be at the Rogue One event held by Disney at Epcot last Monday night. Not only did a lot of new and exciting things get announced for Walt Disney World, sneak peeks of the movie were shown, and of course, the main event (and what was promoted heavily) was the transformation of Spaceship Earth into the Death Star. What came before however was just as powerful, some even more so than the projected image.

To start the event, Disney had beverages, water and Rebellion Berry Lemonade, set out for us to enjoy. The lemonade was raspberry flavored and tasted very tart but still enjoyable. To the left of Spaceship Earth right in front of the last row of Leave a Legacy columns, Disney had set a screen, which was looping the logo for the movie and cool effects such X-wing ships shooting and blowing said logo, and a stage right in front of it. They had two sections roped off: one for media in the back and one in front for the fans that had signed up for the Disney Parks Blog meet up.

When they had finally began the first portion of presentations, Steven Miller and Jennifer Fickley-Baker from the Disney Parks Blog did some Star Wars trivia and handed out some of the new Rogue One Disney Vinylmations.
They then brought up the MC for the evening, Mark Daniels who got the crowd amped up and showed the trailer. He introduced Disney Creative Entertainment Show Director Michael Roddy who gave us a sneak peek into everything Walt Disney World is currently offering and new things that are coming up in the world of Star Wars for the release of the film.

Some examples include a new 7 hour guided Tour, new replicas and a film that is already in Launch Bay, and a lot of merchandise already in the parks. Starting on December 16th until December 31st, Hollywood Studios will be showing both Jingle Bell, Jingle BAM! but also Star Wars: A Galactic Spectacular in the same night. They will be re-adding the random feature in Star Tours so guests will not know where they are going. Star Tours will also be adding a new destination from Episode VIII due out in 2017.

In my opinion, the best part of the night was when Mark Daniels teased the crowd with saying how cool would it have been to bring someone who had actually played in the Star Wars movies and then magically, Mads Mikkelsen, who plays Galen Erso in Rogue One, appeared. He presented us with a never before seen clip of the film. And then the moment that everyone there, watching around the world, and glued to their computer screens refreshing for a picture, was waiting for. No, not that just yet, but Disney did present the actual Advanced Weapons Research Troopers characters that stood alongside storm troopers that were already on stage.

Finally, Spaceship Earth was transformed into the Death Star which then shot a laser into oncoming rebellion ships. Honestly, this might just be my opinion but it was a little underwhelming. Being a sphere, Spaceship Earth does lend itself nicely to round objects such as Mike Wazowski and yes, the Death Star. However, because it is made up of hundreds of triangles and not smooth or flat, it was very hard to see the minute detail of the ship. With that being said, it was very cool to see in person, a privilege that was not extended to everyone I know. I’m sure if I had a better quality camera besides my iPhone 6, I would have taken better photos but the 3D surface of Spaceship Earth was what stuck out of most of them.

After everything was concluded, they had set up some Storm Trooper cupcakes and more beverages. Overall, I think it was a great promotional event and I am very excited to not only see the film but experience all of the new Star Wars things and events coming to Walt Disney World in the future.