It was a historic moment in Major League Baseball history that rekindled America’s love affair with the Chicago Cubs. Now they’re “Going to Disney World,” as sports heroes often do after a big victory. The newly crowned World Champion Chicago Cubs sent three players to participate in a special victory parade at the Magic Kingdom this weekend.

Championship MVP Ben Zobrist plus team mates Addison Russell and Javier Baez helped lead the Chicago Cubs to the world championship earlier this week. They were featured in a celebratory parade complete with Mickey Mouse as a throng of cheering fans, many dressed in the team’s colors, lined the parade route at Magic Kingdom waving “W” flags and holding signs. Mickey Mouse and Goofy both dressed for the occasion, wearing their classic baseball uniforms!

The players and their families enjoyed some of the theme park’s signature attractions, including Dumbo the Flying Elephant. Plus, they spent time hanging out with Mickey Mouse and Goofy and took photos to capture the memory.

“I can’t believe how many (Cubs fans) there were at the parade. It’s just unbelievable,” said Zobrist. “It’s an amazing following of people right here at Disney World.” 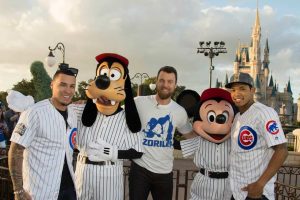 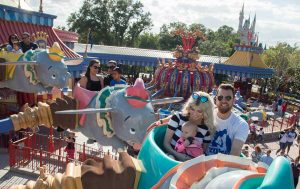 The parade was the perfect exclamation point on a championship celebration that was 108 years in the making. The team last won baseball’s Fall Classic in 1908, the longest interval between championships in sports history.

The parade was also one of the most heart-warming salutes in Disney Parks’ long tradition of sports champions celebrating their victories by “Going to Disney World” which dates back to 1987.