Marvel’s Doctor Strange: A fantastical, fun adventure like no other 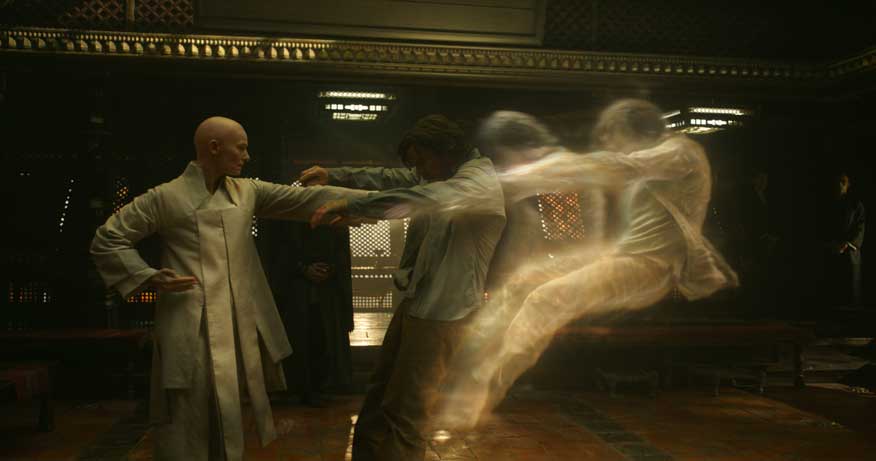 When it purchased Marvel, more than a few questioned Disney’s corporate sanity. Many of the most popular Marvel characters were contracted to other studios (The X-men, Fantastic Four, & Spider-Man for example). But Disney hung its hat on the The Avengers and Marvel’s library of 4,000 characters who weren’t under contract. Now in addition to Ant-Man and Guardians of the Galaxy, you can add Doctor Strange to Marvel movies that will score big for Disney at the box office.

The movie follows Dr. Stephen Strange (Benedict Cumberbatch) as a moment of distracted driving destroys his promising career as a neurosurgeon and sends him across the globe searching for cure that’s outside the bounds of western medicine.

Dr. Strange lands at the door of Kamar-Taj in Nepal behind which lay the realm of Baron Mordo (Chiwetel Ejiofor), Wong the Librarian (Benedict Wong) and The Ancient One (Tilda Swinton). The trio teach Strange the ways of the mystic arts (not to mention martial arts).

Meanwhile, Kaecillius (Mads Mikkelsen), a former student of The Ancient One, has stolen some magic spells and is learning to summon incredible cosmic powers of his own. Can the forces of good stop the big bad guy before the world ends? The end result is a series of chases and battles that break new cinematic ground and show that the power of Doctor Strange comes not just from his mastery of the mystic arts, but his intelligence as well.

As a Marvel superhero, Doctor Strange is a relatively obscure one. His own comic book only ran a few short years, but he’s been a perennial co-hort in the timeline of other Superheroes. His powers draw from the mystic arts, the limits of which are unclear. That makes him quite different from every other superhero who, no matter how strong, does have limits.

Strange, is firmly a part of the Marvel Cinematic Universe. A point the film makes with a couple Easter eggs that you have to be paying close attention to catch early in the movie. There’s also another big connection revealed later in the film, but that’s a pretty big spoiler, so I’ll leave it to your imagination for now.

I’ll be honest, there were parts of the film that didn’t work for me. Some were tired comic book tropes, others just some odd film maker choices in the first act. But once the movie’s main plot gets going, the fantastical fun never really stops. Add to that some amazing visual effects and you have a movie unlike anything you’ve ever seen before.

I saw it in 3D and there are definitely sections of the movie that make tremendous use of it. My recommendation is to see it on the largest screen you can and in 3D.