Update: Trailer is now out and it’s epic.

The Disney movie marketing machine is usually pretty consistent. The night before they plan to drop a new major trailer, they put out some sort of new poster for the movie. That’s the case with Rogue One: A Star Wars Story, which today has unveiled the first cast focused poster for the Lucasfilm production. 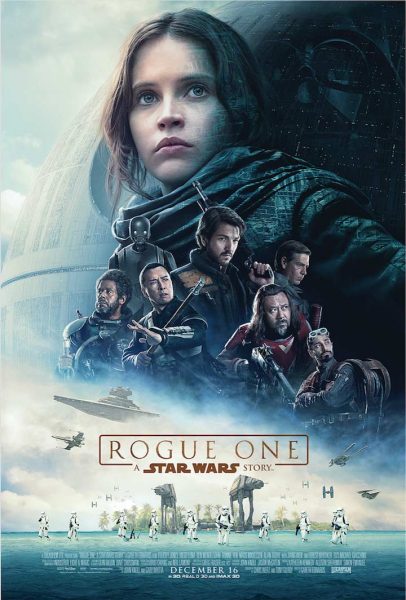 Definitely in the spirit of other Star Wars cast posters, and yet something its own too. What do you think about the image of Darth Vader looming there in the upper right behind them all?

The full trailer will debut on Good Morning America tomorrow and we’ll have it here as soon as we can after that.

Felicity Jones, who plays Jyn Erso, one of the movie’s central characters, recently dished to the Hollywood Reporter on what it was like doing re-shoots for the movie. Reshoots are part of a normal production cycle for most big budget movies, but for some reason the rumors of Rogue One’s reshoots are casting a darker shadow. Jones is having none of that.

“Obviously when you come to the edit, you see the film come together and you think, ‘Actually, we could do this better, and this would make more sense if we did this,'” said Jones. “I’ve done it so many times. I mean, you wouldn’t just give your first draft on this story, would you?”

From Lucasfilm comes the first of the Star Wars standalone films, Rogue One: A Star Wars Story, an all-new epic adventure. In a time of conflict, a group of unlikely heroes band together on a mission to steal the plans to the Death Star, the Empire’s ultimate weapon of destruction. This key event in the Star Wars timeline brings together ordinary people who choose to do extraordinary things, and in doing so, become part of something greater than themselves.