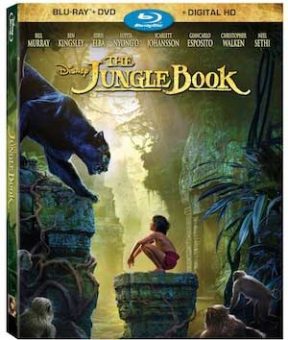 Disney’s live-action remake of the epic adventure movie “The Jungle Book” won over audiences at the cinemaplex earning more than $965 million to date. The new movie pays homage to the original animated version without being a carbon copy. At least that’s how I prefer to see it. Others may see it as an unneeded imitation. In time I believe this version will become a classic all its own.

The new Jungle Book uses photo realistic computer generated animals and jungle to surround the film’s one human actor – Mowgli. It’s so good you’ll never realize that world is entirely created. It also features a pretty amazing voice cast including: Bill Murray as Baloo, the bear who befriends Mowgli, Ben Kingsley as Bagheera, a black panther, Idris Elba as Shere Khan, a feared and scar-faced tiger, and Lupita Nyong’o as Raksha, a female wolf who is Mowgli’s adoptive mother.

Director Jon Favreau and the crew at Walt Disney Studios want you to bring this visually amazing reimaginng of Disney’s animated classic home. It has a small but decent selection of bonus features. My favorite special feature was “The Jungle Book” Reimagined. They go behind the scenes, reveal the technical wizardry that made the film possible, and talk with the all-star cast. The audio commentary is also a nice addition.

Don’t forget to order your Blu-Ray or digital copy via Amazon. Your purchase will help The Disney Blog. Thank you.