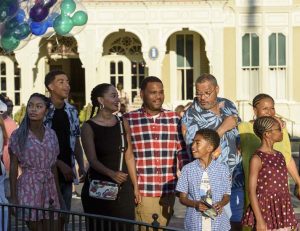 BLACK-ISH – “VIP” – Dre decides to take his family to Walt Disney World on the magical, first-class vacation experience he was never able to have as a kid. With the help of a VIP tour guide, Dre and the kids take full advantage of their VIP status. Meanwhile, Bow, Pops and Ruby set off on their own adventure at Walt Disney World, on the season three premiere of “black-ish,” WEDNESDAY, SEPTEMBER 21 (9:31-10:00 p.m. EDT), on the ABC Television Network. (ABC/Todd Anderson)
YARA SHAHIDI, MARCUS SCRIBNER, TRACEE ELLIS ROSS, ANTHONY ANDERSON, LAURENCE FISHBURNE, MILES BROWN, MARSAI MARTIN, JENIFER LEWIS