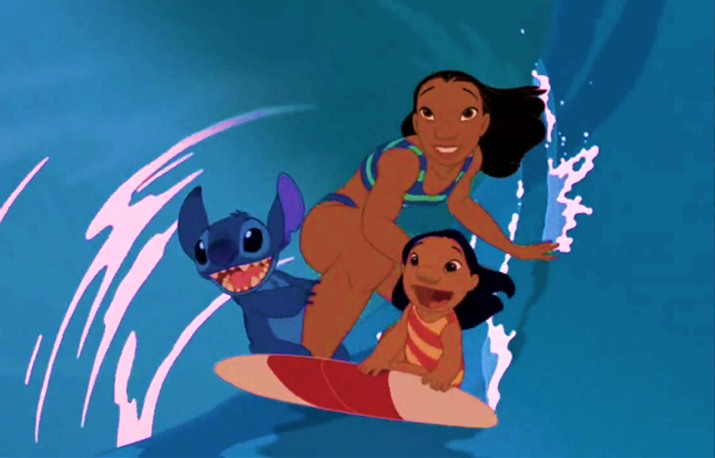 What a better way to kick off Summer than with a new lyric video for Hawaiian Roller Coaster Ride from Disney’s animated classic “Lilo & Stitch.” In the film Lilo, Nani, David, and Stitch are having a nice relaxing surfing day. The song was performed by Mark Keali’i Ho’omalu and the Kamehameha Schools Children’s Chorus.

The watercolor backgrounds and unique style of Disney’s “Lilo and Stitch” have made it a fan favorite. Stitch is one of the few modern characters (who aren’t a princess) to get their own attraction and photo-op in the parks. Despite being released 14 years ago, the film still has a lot of appeal.

I’m still more than a little sad Disney Animation let director Chris Sanders leave the studio when he was forced from the lead of “Bolt.” Sanders brought a unique style reminiscent of much beloved early Disney animator Fred Moore. Disney animation could use more of that uniqueness.

You know. If Disney could mend the bridge burnt by Michael Eisner with Pixar studios, then maybe there’s a chance they can bring Sanders back into the fold and produce a new animated feature featuring Lilo, Stitch, Nina and the whole gang. I’d pay to see that. How about you?