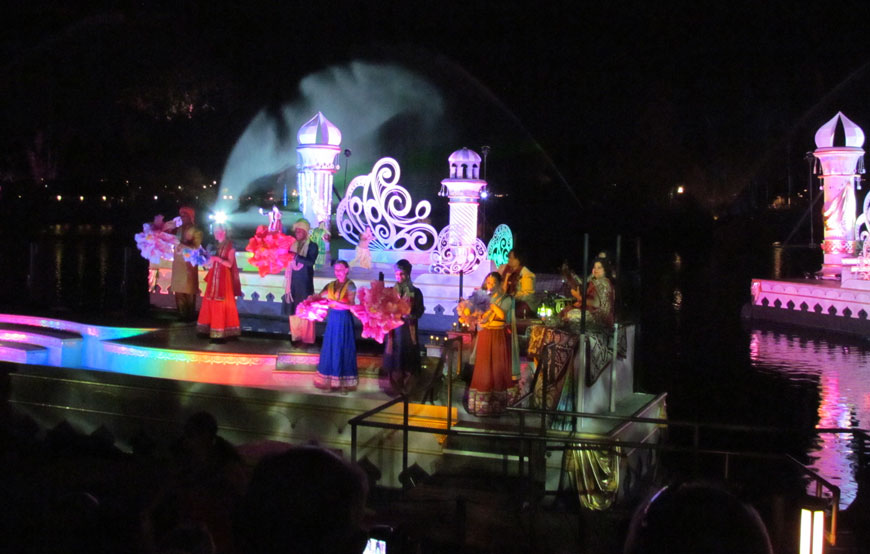 It’s a new age for Disney’s Animal Kingdom. For the first time park hours extend into the night opening a whole new range of entertainment possibilities and experiences to park guests. Disney spent a lot of money preparing the Discovery River Amphitheater to entertain thousands of park guests a night. If you’ve been reading this blog, you probably know “Rivers of Light,” the original show intended for the space was postponed, so Disney quickly created “The Jungle Book: Alive with Magic” as inspired by the new movie that has been performing wonderfully in theaters. We watched the first ever performance for guests Friday night.

What did I love about the show? The music, the energy from the performers, the location. It has some wonderful moments of color and movement. The inspiration from both Indian culture and the movie really came through. From the music infused with the sounds of India to the live performers using instruments common to Indian music, this is not your typical Disney musical.

It’s clear the performers were giving their all. The majority of performers are on the long barges tied up to the sides of the stadium with nine performers divided equally among three floating stages closer to the middle of the lagoon. There are also moments when performers come through the audience, even bringing a few guests out to dance with them at one point (a la Festival of The Lion King). 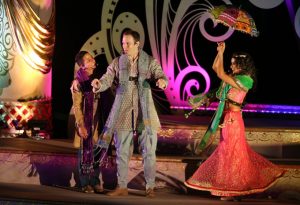 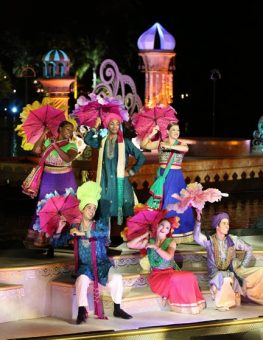 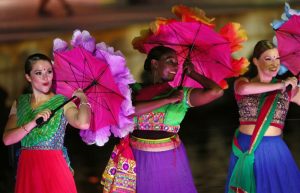 The show also uses three Fantasmic barges driven by techs (I’m told these were brought over from Disneyland). They’re lightly themed and used mostly as transports to get performers onto and off of the center stages. They also play a key role during the fire performances where they have four torches to match the fire performers. 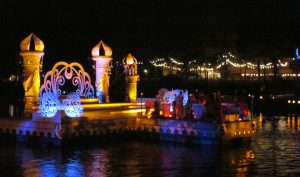 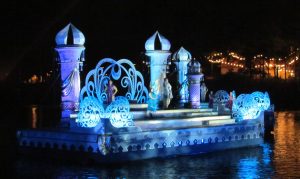 The amphitheater seats about 5,000 guests with a portion of those seats reserved for Fastpass and dining package holders. Those wishing to go standby will have to line up early in Dino-land. I have to say I didn’t enjoy queuing in Dino-land. It was loud (both nearby noisy attractions and a DJ). I’d rather they use the walkway between Finding Nemo and the bridge to Discovery Land. Less worry with cross-traffic interference too.

We ended up waiting more than an hour and a half to see the show. We were let in to be seated about 80 minutes prior to the show starting and the arena was full about 25 minutes prior to the show. The biggest tip is to see the second show of the night if you can. Families with kids probably won’t stick around for the 10:30 show, so you’ll be able to show up 30-45 minutes ahead and still get a decent seat. This also gives you a chance to enjoy the other night time activities in the park before ending the night with a show.

There are two types of seating and some standing room areas. Wooden benches are near the top, the slope is gentle here, which may provide some obstacles if someone tall sits in front of you or you have short children. The stone benches are closer to the water front and have a steeper slope providing a better, but sometimes obstructed, view. We heard some reports that the stone benches retain heat so well, that some rear ends were slightly toasted after sitting on them (perhaps they need to apply some of that pool deck material that keeps it from getting hot in the sun). No seats are so far away that you can’t see the show. But there may be some odd angles to the stage and projection water fan screens from certain seats.

Wheelchair accessible seating is available near the water’s edge and at the top. Both prevent their challenges, the bottom level is right near the performers, but obstructed from the water screens and center stages. The top is behind a someone high wall, meaning those who sit low in their seats won’t be able to see over it. There is also some standing room only areas at the top near Dino-land.

There were some crowd control issues with shows exiting the Finding Nemo show at the same time guests were loading into and out of the Discovery River Amphitheater. That can be solved by moving Nemo shows earlier in the day. The amphitheater itself actually emptied fairly quickly after the show (about 10 minutes), but then Discovery Island became packed with guests. To Disney’s credit, they had plenty of cast members with signs pointing in various directions (standby queue, park exit, etc).

There were two major problems with the show for me and a few minor ones:

Major problem number 1: The big screen just didn’t work. The 140+ foot width for the two water fans was just too big a gap for the jets leaving a big gap in the middle, right where the key part of the projections were located. The big screen is also a pretty sizable distance from the audience leaving to dark and often obscured views of the projections. That may have been a giant tiger stalking the screen, but I couldn’t tell.

As an example, the first photo here is Disney’s official photo of the screens, the next is what it looked like the night I saw it. That gap makes a big difference 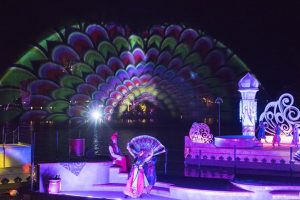 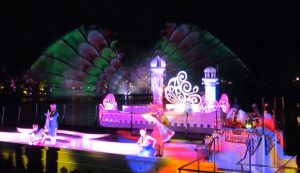 Major problem number 2. There are some staging problems. I was sitting about as dead center as you can get in the amphitheater, but I still had a horrible view of the center float where the trio of singers were located. I didn’t even realize they were singers until the one of them started talking to the audience about halfway through the show. Even the two side stages only have three performers on them and were far enough away from me that I had a hard time following any of the choreography on them at all.

The need to fix the problem with the screen quick. Winds were only around 4 mph during our show, but still that was strong enough to ruin the effect. If they cant get the two water fans to make one giant fan consistently, perhaps they should treat them as two separate fans. I’m not sure what they can do to bring them closer to the audience, so they’re more visible. But anything would help.

Not sure what they can do about the problems with the distance between the center float holding the singers and the audience, which are split between two sides. I like that they have live singers, but the show needs to do more with them, closer to the audience where they can actually be seen. If I could barely see them just a few feet away from the center of the amphitheater, anyone further away from center, would not be able to see them much if at all.

Some of the other criticisms are that the show had no story, but that’s not true. It follows the movie plotline, but is, obviously, very abbreviated to fit the show’s 25 minute length. Disney is relying on the audience’s familiarity with the music to move the show along. 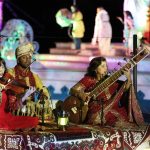 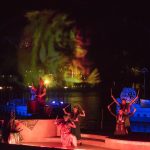 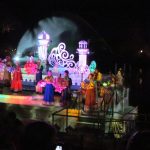 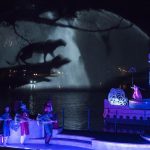 There is a lot to see in the show. However, I had some questions about why they went with live musicians instead of a recording. Having a dozen more dancers on the center floats would have added much more energy to the show and made them more a part of the show, rather than something you really didn’t pay attention to much.

Some of the choreography was a bit basic, I suspect limited by the stage design, but there were some highlights particularly when they incorporated props into the dancing. I would have liked to see more ‘Bollywood’ style close-choreography (the moment with the umbrellas was nice). There was really an opportunity to go full-Bollywood here with lots of color, fabric, and synchronized close choreography. In the show I saw, a few members of audience got up to leave about 2/3rds through. There just wasn’t enough diversity in the staging to keep their attention, I guess.

We also heard some families wishing there were Disney characters in the show. An appearance by Mowgli would have fit in with the new movie, but characters from the animated movie don’t mesh with the photo-realistic computer created animals in the new movie. But still it is Disney’s Animal Kingdom. Where were the animals, even if they were just Baloo and King Louie on a barge? Heck, throw in some of the monkey costumes from Disneyland’s Fantasmic. It’s not running at the moment. They don’t need them. I’m not sure Disney can win here, they get an A for effort for trying to do something interesting, but also get pilloried for leaving out beloved Disney product. Better to make an artistic statement? I don’t know.

I would like to have seen some water fountains used in the show (particularly in the finale). Not World of Color in scope, but 5 or 6 dancing fountains would have added a lot. The lotus flower floats from Rivers of Light have the ability to operate as performing fountains they could have used those. I know using the Lotus Flower floats present problems for getting Rivers of Light ready anytime soon. I also realize that’s a lot of infrastructure to build in a month, but I think it would have made the show much stronger and taken some of the pressure off the dancers to provide all the entertainment.

I have to give Disney’s creative team credit for pulling off as good as show as they managed to do in the time they were given. When I talked with people working on the show toward the end of April, they still hadn’t decided exactly what they were going to do. They knew they were going to use the water screen to show scenes from the film, have music from the film, and that they weren’t going to use any other elements from Rivers of Light. But that was about it. In less than a month, they built 7 floating stages, imported Fantasmic barges, created costumes, and auditioned and rehearsed a cast of dozens. A dancer I spoke to said they didn’t get the call to audition until May 5th and didn’t start rehearsals until about two weeks before opening night.

I’m a fan of non-tradtional shows. So I liked what I saw. I’m going to see it again soon from a different location and will come back with some more thoughts. If you’ve seen it, what did you think?