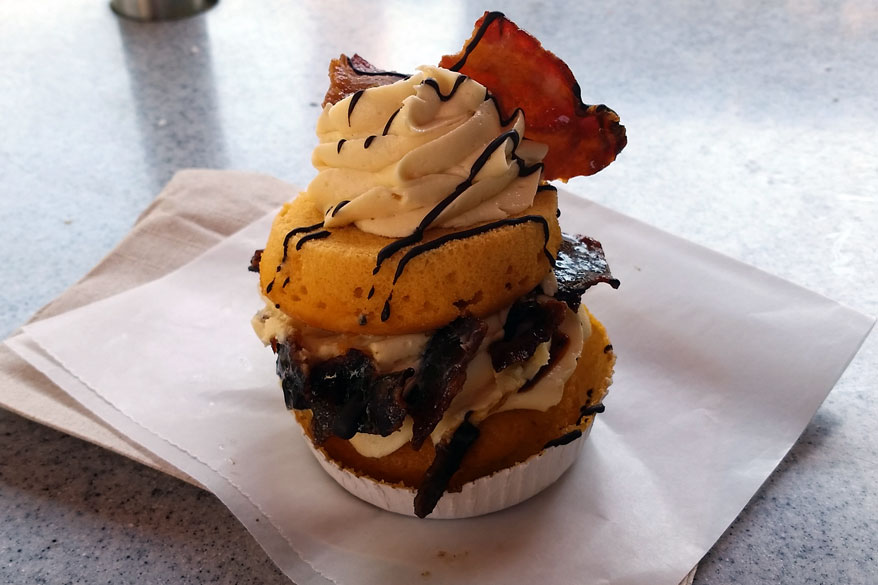 What is Whoopie Pie? I can hear you ask. I too wondered. As best as myself and the cast members at Sweet Spells in Beverly Sunset Shop could determine it’s cake and creamy frosting. I wasn’t sure, so I came home and looked it up online. According to Wikipedia, it’s usually two round mound-shaped pieces of cake (usually chocolate cake) with frosting (or marshmallow fluff) sandwiched between them.

Whoopie Pies are considered a classic New England treat and is the official state treat of Maine. Depending on who you talk to it’s either an Amish treat or was created in Massachusetts or was it Maine. Despite the confusing origins, it has now made its way to Disney’s Hollywood Studios for everyone to enjoy.

Disney, of course, is not satisfied with doing anything like just an ordinary Whoopie Pie, they’ve come out with four amazing variations on the theme. There’s Banana, Orange Cream, Cookies & Cream, and Maple Bacon. They sell for $4.99 each, which is the same price as my favorite treat from this location – The carrot cake cookie. 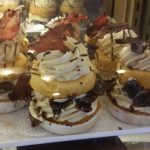 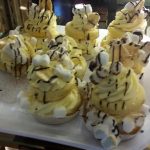 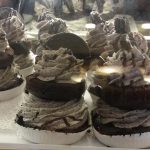 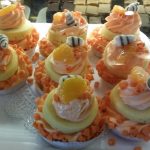 I selected the Maple Bacon and I wasn’t disappointed. Two rounds of yellow cake with a heaping portion of maple bacon frosting in between and dolloped on top. Then for good measure, they stick a small handful of candied bacon into the frosting and drizzle it all with chocolate.

The cast member actually asked me if there was too much bacon on it. Wasn’t that nice? I devoured it entirely and savored every bit.

It was a big awkward to eat. You can’t shove it all in your mouth, it’s too big (about the size of a medium cupcake). So be sure to ask for a fork and knife with which to dissect it. I tdoes count as a snack credit for Disney Dining. So maybe save a few points for that pre-Fantasmic! snack.

Not sure if this is a permanent addition to Sweet Spells, but if it’s available when you check in, it’s a great alternative to just ordering a cupcake or, and I can’t believe I’m saying this, the carrot cake cookie. Maybe alternate for variety.