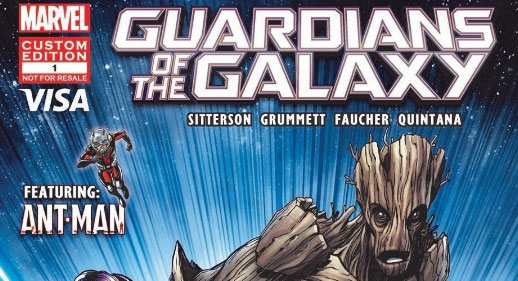 Marvel Comic Book collectors now have another rare Guardians of the Galaxy cover to search after, and they may learn a little bit about personal finance at the same time. I’m sure that will come in handy when they’re desperately trying to sell those collections of comic books in order to finance their retirement (a position that hits close to home for me as well). 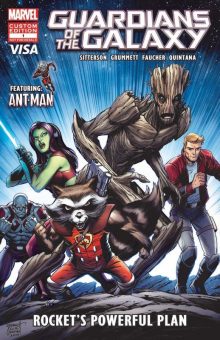 “At Visa we believe that financial education is most effective when the public and private sectors work together,” said Hugh Norton, Head of U.S. Financial Education, Visa Inc. “Our partnership with Marvel and the Public Library Association allows us to make financial education entertaining and engaging, while also offering educators a resource that introduces basic money management concepts to the classroom.”

Guardians of the Galaxy: Rocket’s Powerful Plan is available through Practical Money Skills for Life, a free, award-winning, teacher-tested and approved financial education program by Visa. The program was launched in 1995 and is now available in 16 languages across 42 countries.

“We are thrilled to partner with Visa on this exciting educational opportunity. This comic provides personal finance lessons in a way that excites children, and public libraries are the ideal place to make a resource like this available,” said Felton Thomas, President Elect of the Public Library Association and Director of the Cleveland Public Library. “We are proud to offer a tool that allows young people to get started early on making sound financial decisions.”

“Working on this comic was a unique opportunity that enabled us to introduce core concepts about finance and savings using the Guardians of the Galaxy and Ant-Man in a fun, action-packed story,” Darren Sanchez, Marvel Custom Solutions Editor, said.

The new comic book will not only be released in the U.S. but also around the world in 16 languages. This is the second time Marvel Comics and Visa have teamed up to create a comic focused on financial education. The first comic, Avengers: Saving the Day, was released in 2012 and is available in nine languages. More than 497,000 copies have been distributed worldwide.