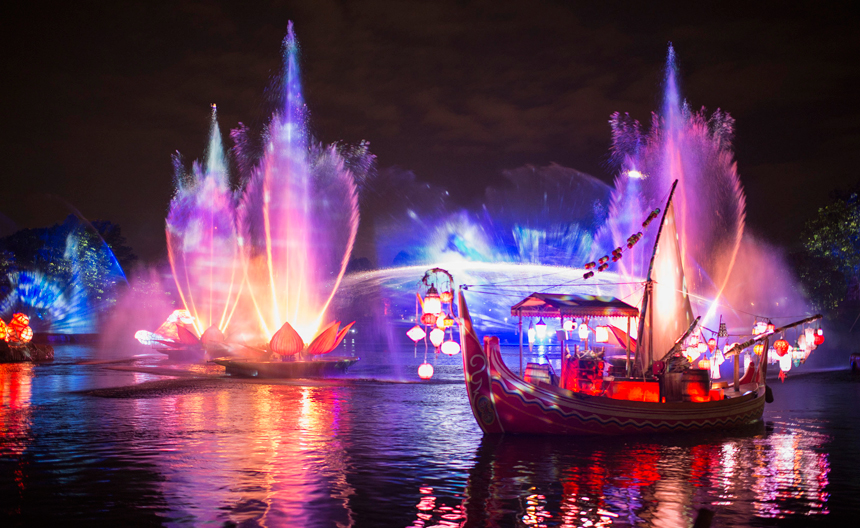 Last week the media were shown an exclusive preview of the exciting night time show “Rivers of Light.” When it’s complete it promises to transform Disney’s Animal Kingdom with a first of its kind show that mixes water screens (including one of the biggest at any Disney theme park), digital projections, fountains, spectacular water floats, and a few surprises that you have to see in person to believe. It incorporates footage from Disneynature along with a beautiful soundtrack. The end result is a close relationship with nature’s beauty as only Disney can provide.

The show is still a work in progress and even the short segment we saw is unfinished. What you see here features stationary floats, while in the final show the floats will move and spin to add a dancing motion to the segment you’re seeing tonight. The show itself takes place on Discovery River while approximately 5,000 guests watch from newly installed seats on its banks.

You may recall that the Disney Parks Blog actually announced that Rivers of Light would premiere on April 22, but the show was never going to be ready by that date due to technical problems. So either someone at the show was making promises they couldn’t keep or someone in marketing acted without asking the show producers what the reality was. Either way, it was a bad situation for any guests who made, or changed, plans to be at DAK on the 22nd. They’ve all had to change those plans again. 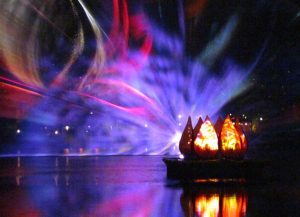 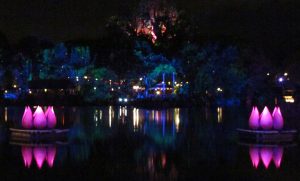 This is made more difficult by the fact that no date has been given for the premiere of the show. Instead there will be a fill-in show that celebrates Disney’s new hit film “The Jungle Book” using some of the Rivers of Light technology (mostly the water screens and digital projection). Having seen how amazing just the water screens are, I’m excited for this show too. It will run until Disney feels “Rivers of Light” is ready to be seen by guests. That could be in two months, three months, or more. But they’re shooting for mid-July sometime.

While I’m disappointed I’ll have to wait, I understand and appreciate why Disney doesn’t want to show anything before it’s really ready.