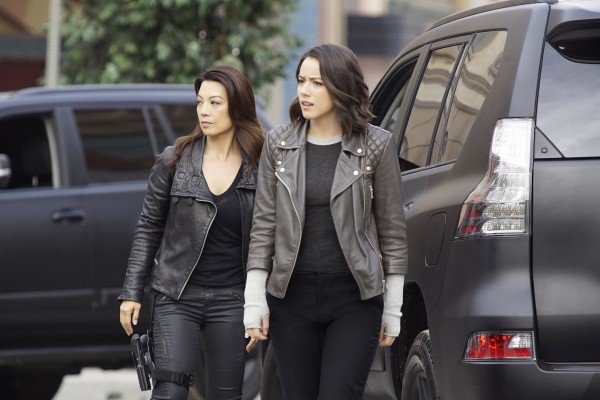 This weeks episode started with a conversation between a business owner and a homeless man that’s been sleeping in his parking lot. The shop owner offers him money for breakfast but as soon as he touched the homeless man he gets a glimpse of the future. He calls 911 and uses words like “Hydra” and “Daisy Johnson” which, of course, brings SHIELD to the scene.

Hydra shows up and kills the shop owner, fulfilling his vision. They also capture the homeless man, Charles, but not before Daisy touches him and gets a glimpse of the future as well. In the flashes, among other things, she sees him dying, Lincoln covered in blood and Coulson shooting her. The team knows they need to save Charles and decides to do everything opposite of Daisy’s vision. May goes on the mission instead of Daisy and Coulson refuses to use a gun until they’ve saved him.

Meanwhile, Ward/Hive and Malick go to the company that built Coulson’s robotic hand and take over. Hive kills all but one of the board members, he leaves the last guy for Malick to kill after he’s given a pair of mechanical arms exoskeleton that give him super strength.

Back at SHIELD, the team is about to head out when the intruder alarm goes off. Andrew, May’s ex-husband, has come back to say goodbye because he’s about to change into Lash for the last time.

So, May stays behind with Andrew while Daisy goes on the mission, just like in her vision but she goes alone to keep the rest of her vision from coming true. Fitz is able to tap into the security system in the building and they realize that Daisy has gone in over her head. Also Grant Ward is alive. Coulson tells Daisy to head to the roof to save the man while he goes after Ward.

Coulson and Lincoln split up but neither is successful. Daisy makes it to the roof but is attacked by Malick. He is about to kill her when Charles steps in, sacrificing himself giving Daisy enough time to take Malick out. Daisy touches Charles one more time before he dies and sees the space explosion that we saw at the beginning of this half of the season.

All in all another solid episode, though I am surprised at how quickly the team accepts the idea of someone being able to see the future since they spent most of the first season completely unable to accept the idea of a Clairvoyant.