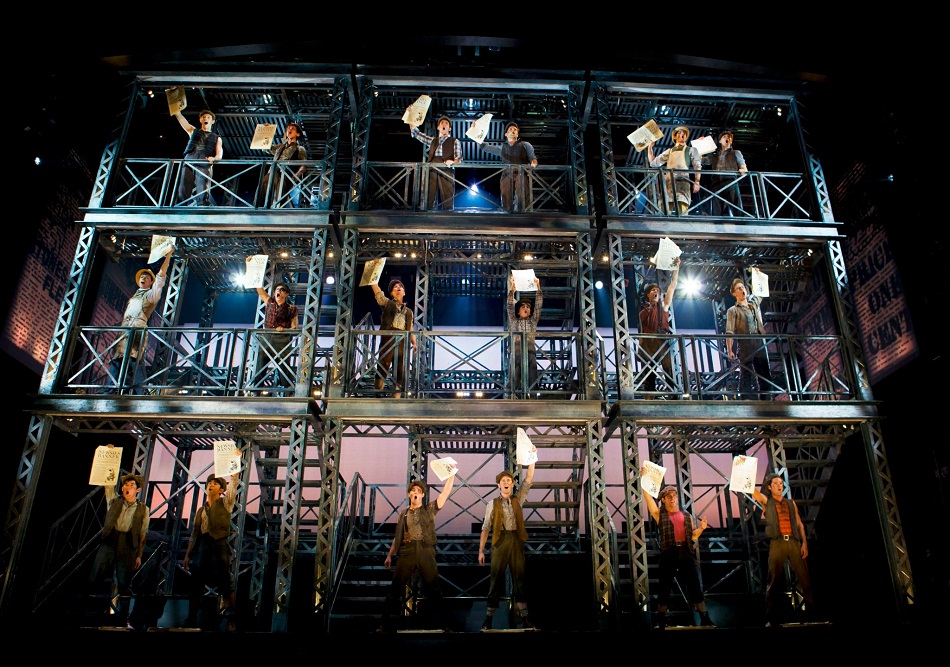 Fans of Disney’s Newsies stage musical who want to continue to seize the day and will soon get their chance as multiple regional productions will open in the Summer of 2017. Can’t wait until then? There are still a few remaining performances of the North American Tour before it reaches its final performance on October 2 in Austin, TX.

From the beginning, Newsies’s improbable longevity and reach has been driven by its fan base. Based off the 1992 cult-fan phenomenon supported movie that starred Christian Bale and choreographed & directed by Kenny Ortega (starting a long relationship with Disney). The Broadway musical begain as a pilot regional production at Paper Mill Playhouse. Mounted only as a template for licensing, Newsies was called to New York by critical acclaim, opening on Broadway March 29, 2012 for an intended limited run of just 101 performances. The show’s fiercely devoted fans had other ideas, however; they drove the show to a run of 1005 performances, attendance of more than one million and a gross of over $100M.

“We are enormously grateful to our fans, those self-proclaimed ‘fansies,’ whose passion for Newsies propelled the show to a Tony Award-winning Broadway run and then to a record-breaking tour,” said Thomas Schumacher, President and Producer, Disney Theatrical Productions. “That enthusiasm remains palpable as Newsies is the most requested Disney stage title among regional theatres, community theatres and high schools in North America. I am so delighted that the life of this classic underdog tale will continue to reach new audiences.”

This is big news for Disney Theatrical Productions who are attempting to answer the demand for more Newsies than just one tour can provide.

Newsies will be mounted in over a dozen regional theaters, including such nationally-regarded houses as Tuacahn Amphitheatre (Ivins, Utah), Pittsburgh CLO (Pittsburgh, PA), Fulton Theatre (Lancaster, PA) and Music Theatre Wichita (Wichita, KS). Professional theatres can request stage rights for Newsies exclusively through Music Theatre International. It sounds like if you want a regional theater production near you it’s time to reach out to your local theater organization to offer your support.

Are you a member of the fansies? Have you seen the stage version?