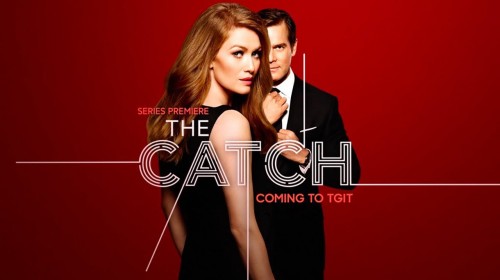 How to Get Away with Murder does 15 episodes a season and that is all. The goal, in their eyes, is to be able to create jam packed episodes and less fluff. The show does succeed (I can only describe the show as “bonkers genius”), but still poses a challenge for #TGIT. Grey’s and Scandal both have the full 22+ episodes per season, leaving a buffer space for devoted #TGIT viewers. Last year, they filled the slot with American Crime. Critics loved it, but viewers weren’t there, seemingly because it wasn’t under the Shondaland banner because, as we all know, Shonda is our ruler. This year, however, they hope to alleviate that problem with a Shondaland produced program called The Catch.

The series follows Alice Vaughan (the superb and delightful Mireille Enos), a private investigator who also owns a security firm. She always finds the bad guy and gets the bad guy. Yet, her fiancee (played by Peter Krause) is the biggest bad guy of them all and has been performing the ultimate con for a over a year. One day, he leaves her with nothing and the chase begins.

The show has had a multitude of problems before airing. The original showrunner was fired. The concept of the show was then altered when a new showrunner came in, leading to multiple casting changes and a complete reshoot of the pilot. In a television season with a lot of shake-ups behind the scenes, this program had the craziest journey of them all.

Even with the trepidation, I came out loving this. Every Shondaland show has their own aesthetic, and The Catch definitely knows its voice. Angular and reflective shots of Los Angeles are showcased as transitions (like Scandal‘s camera clicks), current pop and R&B hits make up the soundtrack (like the alternative rock of How To Get Away with Murder), and the script blends very sticky situations with light-hearted quips to create a very brightly toned program (similar to Grey’s Anatomy, in my mind).

The cat-and-mouse chase we are about to embark on is thrilling and the clear and conflicted relationship between our two main characters has me really excited to see how they help/hurt each other in their separate quests. The supporting players all were wonderful, which makes me excited to know that I won’t be annoyed when screen time is withheld from my new savior, Mireille Enos.

Ellen/Meredith. Kerry/Olivia. Viola/Annalise. Add to the list Mireille/Alice, because if all is right with the world, this show will be sticking around for a long time. Be sure to watch it at 10pm EST March 24th on ABC.