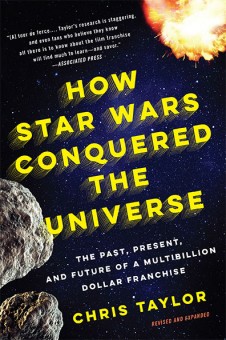 Whether you’ve been a fan of Star Wars from your first glimpse of a lightsaber in 1977 or are newly acquainted with the franchise thanks to “Star Wars: The Force Awakens,” you are now a part of a rich legacy of movie making lore. If you want to learn more about the franchise, a great place to start is the newly revised and expanded edition of “How Star Wars Conquered the Universe: The Past, Present, and Future of a Multibillion Dollar Franchise” by journalist Chris Taylor.

Taylor spins a story nearly as interesting as the worlds he chronicles. Starting with the birth of the original film and following through to the purchase of Lucasfilm by Disney and the making of “The Force Awakens.” With even more Star Wars movies on the horizon, Taylor provides insight into just where it can go from here.

The story that starts with George Lucas and how he transcended all the blocks and obstacles thrown in his way to make the first and subsequent movies is a bit of movie making history finely told by Taylor. You’ll definitely have a new appreciation for Lucas and all he accomplished after reading this book. You’ll also learn about the other players who helped shape and continue to shape Lucas’ legacy.

I found Taylor’s writing and stories endlessly surprising. He’s able to clearly articulate just what it is about the Star Wars franchise that is so attracting to so many of us fans while also giving the sort of information and detail the hardcore fans are longing for. I consider myself very knowledgeable about Star Wars, but there were many facts I didn’t know or only had part of the story.

Whether you’re just awakening to the Star Wars phenomenon or have been there from the start, you’ll want to add How Star Wars Conquered the Universe to your bookshelf today.